Taking a break from the ghosts and haunted houses this Halloween season, I went in an entirely different direction and, seemingly, ended up with results just as terrifying. The homicidal, demonic impulses of children. Given the fear factor and creepiness of so many bad children movies lately, I suppose I shouldn't be that surprised. "Afterschool", the debut feature of NYU student Antonio Campos and "Home Movie" by Christopher Denham, share a common theme of modern technology documenting and informing the awkward self-growth of confused, screwed-up kids. And while neither film is a complete success in my opinion, they are exciting examples of independent film making pushing the envelope of technique and visual aggressiveness. 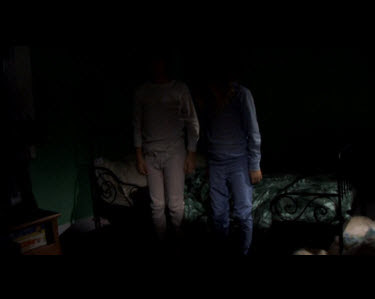 In the case of "Home Movie", director Denham opts for the messy aesthetic of a home video camera to document the slow-burn evolution of two siblings Jack and Emily (Austin Williams and Amber Joy Williams) from passive aggressive trouble makers to young serial killers-in-training. Mostly shot by Lutheran preacher/father David (Adrian Pasdan), we soon begin to wonder when anyone will notice the dangerous underpinnings of these twins... such as how they quietly appear without notice carrying blank stares or their grotesque fascination with the torture and dismemberment of the family pets. But as any faux-video camera movie lover knows, we have to work our way up to the sadistic shots, which "Home Movie" eventually conjures up in the final disturbing few minutes. To make matters even more ironic, the household matriarch (Cady McLain) is a child psychologist who tries to self medicate her children into bliss. While "Home Movie" does feature some creepy moments (whose shock edit is to visually collapse the first-person video shot with colored static and jump right into the next happy family moment) the fault of the very short film is its underwhelmed parent character development. How long will they continue shooting the macabre events after they figure out their children would put The Omen kid to shame? Enough for another 30 minutes of film, obviously. "Home Movie" is a nice experiment, but I wonder if a more traditional approach (i.e. careful camera compositions and less enthusiastic, unnatural parent reactions) would have gleaned just as many scary truths.

Likewise interested in the slow bridge from awkward adolescence to something a bit more demonic is Antonio Campos' "Afterschool". The better of the two films, Campos does choose calculated camera positions and a shrewd sense of editing to jolt the viewer out of our hazy submission when the violence does occur. Robert (Ezra Miller) finds life at an upstate New York prep school unfair. With few friends and a drug dealing roommate, he recedes into the world of online violence (You-Tube like clips of girls fighting) and amateur porn. While filming a documentary for his AV class, he records an empty hallway when two popular and pretty twin sisters emerge from the school bathroom in mid overdose. He runs over and sits with one of them as she dies. What follows is a scathing, absurdly funny and highly caustic examination of Robert's life as he deals with the trauma and tries to engage his emotions through the static window of the world he's absorbed online. And it features a final shot that re-imagines the entire film in scary and horrible ways.

Campos films "Afterschool" with a stationary camera that observes most of the action head-on with a blurred depth of field. People and images are often blurred until they walk up close to the camera and begin their conversations. It's as if we're watching this environment through the widescreen window of an observation room. And it fits the clinical approach Campos seems to harbor for his characters. Robert does find love (and sex) in muted, off-center moments with girlfriend Amy (Addison Timlin) but "Afterschool" eschews any coming-of-age gestures. This is nasty and sociopathic stuff. 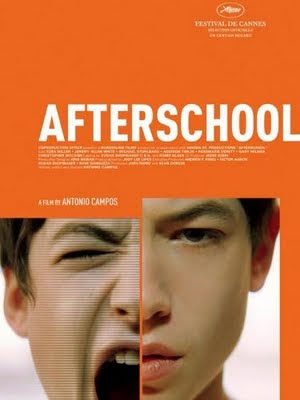 It's impossible to deny the influence of Michael Haneke on Campos and his effort. The way video images are toyed with, "Afterschool" continually challenges the viewer to discern what's a recorded sequence and what's actually happening in narrative order. The opening shot of Haneke's masterpiece, "Cache" for example, has been his provocative style since day one. While Campos isn't quite in this territory yet, "Afterschool" does prove he has a knack for manipulating point of view into a twisted ideal. Campos even includes a wink to the audience in the final scene after we're exposed to the real nature and obstructed action done by Robert in that hallway observing the two girls die. But for me, the real triumph of "Afterschool" is young Robert's cut of the "memorial" video for the girls, quickly shuttled away by the uptight head master (Michael Stuhlbarg) after seeing the twisted images he put on-screen. I couldn't imagine a more fitting visual representation inside the head of a troubled kid than that, home video camera or otherwise.
Posted by Joe Baker

"WOW"!!! What a nice Blog...I found your Blog very spicy and Caleb world. It gives me interesting information about the movie Afterschool. You include Damn Cool Pic of this movie. Well I have not watched this movie, but your Blog makes me to watch Afterschool Movie, So I m very excited to see it as I am a big fan of comedy and drama movies.