If Ron Shelton's "Bull Durham" is the comedic take on life in the minor leagues, then "Sugar" levels off and presents something a bit more realistic... where getting to "the show" is a daily grind that seems to crush the life out of every wanna-be major leaguer. But in hindsight, Anna Boden and Ryan Fleck's intimate portrait of Sugar Santos (Algenis Perez Soto) and his search for a spot on a professional roster is less about baseball and certainly more about the compounding confusions that overwhelm a non-English speaking immigrant plopped down in the middle of America. And isn't that what the greatest sports movies do? Which is to say they present grand human emotions and self discovery against the ordinary facade of competitive sportsmanship. "The Natural" and "Tin Cup" says more about growing old than "Grumpy Old Men". And dare I even mention "Hoop Dreams" which packs more truth in every frame than any NBA game shown on television. "Sugar" deserves to be mentioned in that rare category of a sports film that tells a universal story with subtle flare and a discerning eye for the details in life. 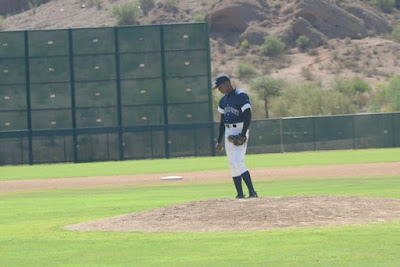 As "Sugar", Perez Soto is a quiet force. From the opening, where we see him bounce back and forth from an American run baseball camp in the Dominican Republic to his cluttered small town and large family, we're immediately on this guy's side. With a searching camera that zooms and darts back and forth, rarely missing a small detail or change in some one's eyes, "Sugar" embarks on an unexpected ride as Sugar is signed to the minor leagues, shuttled to Iowa where he lives with a very white-bred family and deals with the pressures of everyday life in the minors. Submerging the viewer into the same disorienting experience that Sugar feels here- including a revealing long take as he walks through the lobby of a hotel and into a loud video arcade- directors Fleck and Boden make sure their film slowly evolves into a character study of unique proportions. Then, the rug is pulled out from underneath us and the film's third act takes a compelling avenue that sorta creates the magical effect of the overall film. The relationships that Sugar forms and the coda, where real life immigrant players speak directly to the camera and say their names and drafted teams, etch out a beautifully realized film about life on the edges of a dream.

With their previous film "Half Nelson", Boden and Fleck have risen to the top as strong independent filmmakers who document messy, complicated lives in flux. There wasn't a single mis-step in that debut film with Ryan Gosling as a drug addicted teacher trying to reach bright student Shareeka Epps. Fleck and Boden have a knack for subverting expectations in conflicts, and the moment where Gosling approaches drug dealer Anthony Mackie plays out in the opposite manner in which we expect. Likewise, in "Sugar", Santos falls for the religious daughter (Ellary Porterfield) of the family he's staying with and their relationship develops in awkwardly truthful ways as well. There's also the great moment in "Sugar" where he and his girlfriend meet a friend on the corner and we learn he used to pitch for the Yankees minor league system. Fleck and Boden's camera catches a glean in his eye before he averts his look down to the ground and a flush of remorse covers his expression. Whether that moment is scripted or not, Fleck and Boden wisely capture these glimmers of human nature with ease. For the entire running time of "Sugar", it also feels like they've captured human nature in motion.

Bonus: the stirring scene in "Half Nelson" where Epps makes a drug delivery to a hotel room and discovers her teacher's private life, told in sound, image and utterly honest eye contact.