Fernando Meirelles's "Blindness" is a completely divisive affair. Raked over the coals at Cannes and forced to drop a supposedly laborious voice over from a secondary character played by Danny Glover, the latest incarnation of Nobel prize winner Jose Saramago's novel is no less a disturbing roll down a dark hole. If films like "Beverly Hills Chihuaha" are the current cute escapes from reality, then "Blindness" is the epitome of adult cinema- and its no wonder that it's a movie sinking in theaters like the Titanic. Following a basic three act structure, the film opens with the inexplicable spreading of the 'white sickness' around an unnamed city. Taking cues from Romero's "The Crazies" as well as Candian actor/writer/director Don McKellar's own vision of the encroaching apocalypse (with "Last Night"), "Blindness" is compelling and disorienting. Meirelles uses every type of lens overexposure and rack focus known to man. The second half, which composes a majority of the movie, traps the viewer inside an abandoned hospital as the government dumps the patients affected inside- then forces us to indulge in the inhuman and inhospitable living conditions of the characters. Floors are smeared with human feces, the claustrophobic quarters are maddening, and the camera routinely alternates from deep blacks to blinding white with maniacal precision. It was during this portion (which also includes a deceptively sleek microcosm of the collapsing universe through the various factions that arise within the patients) that I slowly realized there's no escape. Like it's blind characters- except Julianne Moore who dissolves into a messiah figure- there's no where to go. "Blindness" locks you up with these people and gives no relief. Jealousy, filth, rape and violence are the common components of trade. This is a film that deteriorates quickly and turns your stomach. And I assume that's the point. Mierelles wants us to endure the same punishing environment that Julianne Moore inhabits. In this regard, "Blindness" succeeds magnificently. But does that alone make "Blindness" a great movie? If a film recreates its claustrophobic mood in such a perfect manner, does it deserve more or less recognition? 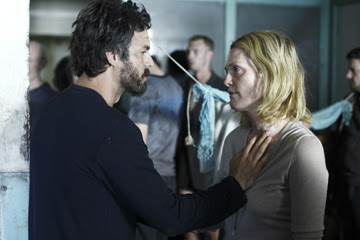 After this stomach-turning second act, "Blindness" finds a redemptive tone and opens up a new path for a select few of the patients in its third act. With this and the adaptation of Cormac McCarthy's "The Road" later this year, it seems that the apocalypse genre is a hugely viable option right now. I'm not ready to proclaim "Blindness" as the torch carrier for all others to follow, but there's no denying the film's gut-punch aesthetic. This might be one that I need to see again and judge with a more objective eye (now that I know what to expect). Still, this is in no way the debacle that it's being called. If nothing else, "Blindness" achieves that rare connection which forces the viewer to interact with the movie on a visceral level. I guess that's always a good thing when art can impact our emotions.
Posted by Joe Baker