The zombie genre has metastasized into something brutal and relentless. Gone are the days of George Romero's slow-walking, mummified dead things. After Danny Boyle's "28 Days Later" (and to some extent Zach Snyder's re-interpretation of Romero), the zombie turned into a rapid killing machine that couldn't be outrun. It was a disturbing scenario- here were flesh eating beings that can usually catch their prey and tear into it with ferocious hatred. In our video game inspired-ADD diagnosed-lifestyles, I suppose this evolution to bigger, stronger, faster was inevitable. But, that doesn't always make the zombie genre more enjoyable (if enjoyable can be applied to horror films for some). At times, turning the clock back and representing the living dead as normally paced people can be a refreshing diversion. But perhaps the most amazing thing is that I never imagined spending a whole post talking about the noticeable differences in 'zombies'. They truly have immersed themselves in pop culture. Two films I recently watched underscore the wide gap in vision about zombies. While I prefer to say little about both films as a whole since they're both pretty much middling efforts, I did take great pleasure in watching how both films represented their respective creatures.

First, John Erick Dowdle's "Quarantine" follows suit with the more modern wild and fast zombie interpretation (or mutated humans... we could quibble all day over what makes a zombie a "zombie" I suppose). Filmed in hand-held style ala "The Blair Witch Project", this film's creatures come bursting out of the dark corners with the single desire to shock and awe the audience. They're rabid and bloodthirsty and armed with little subtlety- until the ending which tosses in an extremely effective set-piece in an attic. "Quarantine" is certainly a 2000 AD zombie movie, built to scare and gross out. White it's no fault to the zombies as to why "Quarantine" ultimately fails as a horror movie- or for that matter due to the good lead performance of Jennifer Carpenter from "Dexter" fame- the rabid and fast zombie may be on its way out. One can only ride the ferocity of these creatures so far before we become bored with the idea and move onto something else. And that's exactly where the next film takes us. 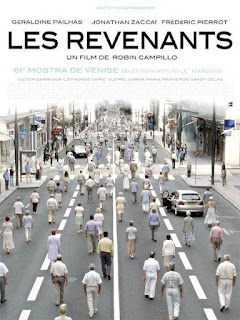 "They Came Back", released in 2005 and just now making it to these shores on DVD, is French filmmaker Robin Campillo's version of the living dead centered around an intriguing exploration of the genre. A horde of loved ones slowly wanders back into their hometown one day. No, they aren't out for brains. They don't have the scent of rotting flesh. They look just as ordinary as anyone else in this French city. The city sets up warehouses for them to live in as they acclimate themselves back into society. There's no explanation. The government studies them, observes their blank nature and creates a drug that will help keep them under control. The only drawback to these 'returnees'? They have limited memory, never sleep and seem damned to wander the night in directionless paths, even when their loved ones lock them up in bedrooms. Of course, these zombies do harbor (abstract) ulterior motives, but Campillo's film is much more interested in the damage that arises in the psyche of the living after their loved ones returns than satisfying the usual tropes of the zombie movie. There are moments of fleeting creepiness (the blank stare of Mathieu played by Jonathan Zaccai and a little boy falling off a balcony ledge then slowly getting up and wandering into the night) but Campillo's film is so hermetic and static that it borders on tedious. Like the best pretentious French art, it shows a lot and explains little. For an ambitious entry in the zombie genre, this is dangerous territory and one that many will be turned off by. Look for brain-munching madness elsewhere. This is 'zombie avant garde'.

Still, regardless of the individual merits of either film, they both stand as interesting testaments to an ever evolving genre. Where it has to go next, I have no idea, but I'm sure it will be entertaining... and hopefully a little gross too.
Posted by Joe Baker

This post is on a subject very close to my heart. As you well know, horror is my genre of choice. You're observation about the transformation of the zombie sub-genre is dead-on, although I believe the days of the rapid, high-energy, red bull drinking zombie is still en vogue, and unfortunately I don't see it going away as fast as we both would like. Eventually it will play itself out, but the "ADD" audience isn't going anywhere anytime soon, and so, neither is the tweaked zombie. Hopefully directors will ignore the urge to continue to go this route with the zombie film, and take it back to the slow, relentless, moaning brain-eaters that we have come to adore. Why will this film style ultimately win- it's simply scarier. If directors take the time, and trust in the audience to have the patience that these films require, the payoff will be bigger. Let us wait and see...dude here

Hmmmm. I haven't seen the second one, but it seems interesting. I'll have to check it out. Thanks for the heads up.

to me there two kind of zombies, one of then are resident evil zombie slow rotten mass of angry and hungry, and we have the other type however I don't consider that zombies, but no matter, the creatures of 28 days.
Generic Viagra Buy Viagra.

cool post, though 'rec' i thought was a relatively good variation... even if the 2nd one decided to go all demonic possesion.