Week 4 of the Trahscan Odorous Jr. radio show is in the books and can be found here. If you're a Dallas Cowboys fan, then I urge you not to listen to the sports show as I get pretty virulent about 'America's supposed team'.

A few weeks ago, I took part in a blogathon about films that I had to see but couldn't for whatever shameful distribution reasons. Looks like one of those films may be coming off that list. Abel Ferrera's "Mary" is set for a limited release in New York after three years in exile. There's also a New York times article that writes about Ferrera and his long-lost film. Here's hoping "Go Go Tales" and "Chelsea On the Rocks" aren't far behind. 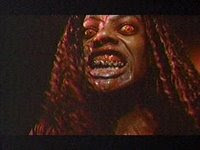 And, in the spirit of Halloween, here's a repost of the great blogathon from last year that culled the "films that give you the willies" from dozens of great blogs and hosted by Ed Hardy at his Shoot the Projectionist site. Scroll through the complete 181 titles nominated and find yourself a few good titles to rent for your nights alone. Or you could just get really, really scared by visiting Piper at his blog.
Posted by Joe Baker