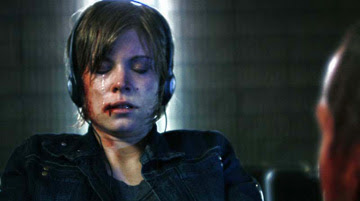 "The Signal" is a convincing, low budget vision of our world in complete moral and social collapse. Earning raves at last year's South By Southwest Film Festival, it's bleak, thrillingly original.. and even darkly funny. Filmed in High-def by three separate directors, "The Signal" plays out in chapters (or "transmissions") following the same set of people caught up in, basically, the end of the world. Imagine the brilliant opening of Danny Boyle's "28 Days Later" magnified over 90 minutes, and that begins to give you a hint of the grim eeriness "The Signal" achieves. Even though each director- David Bruckner, Dan Bush and Jacob Gentry- participated in the overall story and screenplay, they each take the same story in wildly different directions, ranging from satire to the gravely serious. The sum doesn't quite equal to its parts and that just barely keeps it from becoming a truly great and horrifying apocalypse flick.

We're introduced to Mya (Aneesa Ramsey), post coitus, with her adulterous partner, Ben (Justin Welborne) in Terminus City (points off for film school obviousness here) on New Year's Eve. She slinks out of the apartment when the TV set suddenly turns itself on and gives us a Grateful Dead-like explosion of colors and static. Ben turns it off and goes back to bed, unable to talk Mya into running away with him. Mya returns home to her husband, Lewis (A.J. Bowen) who's entertaining friends. The TV set in the background is producing the same white noise. After a brief squabble, Lewis takes a baseball bat and bludgeons his friend to death. Mya runs into the apartment hallway and the apocalypse is certainly underway as bodies are strung about the hallway. People begin to randomly turn into homicidal maniacs as every bit of technology (TV, phone, car radio) emits the same incessant buzz. Eventually able to flee into her car, "transmission 1" ends with Mya crashing her car and hoping to walk to "terminal 13" at the local airport, which stands as the veritable Eden in this vision of hell. "Transmission 2" abruptly shifts gears as it follows Clark (Scott Poythress) as he watches Mya walk away from her vehicle. He seeks shelter with Anna (Cheri Christian), a housewife whose just killed her husband as they prepare for a new year's eve party. Overshadowing the previous mayhem, this section opts for a more comical take on the situation. And while this scenario, ending with Lewis breaking in to find out where Mya went based on her car being outside, will take most of the flack from hardcore gore lovers, it makes sense in its own weird way. Not only does it give the viewer a much needed break from the grimness of the opening section, but it manages to subvert our expectations and place us inside the warped heads of these people being manipulated by the signal. Some are turned into maniacs, and others are rendered helpless by their loss of reality. Even though Anna killed her husband, she continues to manifest the belief that Clark is her husband. It may seem easy to pick apart this section and while it certainly lacks the intelligent edge of the others, it supplies us with an equally deranged descent into madness. The third section reunites Ben and Mya in terminal 13, but with an axe-toting Lewis not far behind.

I have to admire what directors Bruckner, Bush and Gentry have attempted. "The Signal" is not over-directed, i.e. full of inescapable hand held shots that whiz by without a proper sense of any character or emotion. There's a careful attention to ambiance, placement and mood throughout the whole film. The bodies are displayed in just the right corner of the frame and while some of the 'kill scenes' are obviously making up for its shoe-string budget, they're no less disturbing. And even when the story itself heads into some pretty heady territory, one can see the whole thing fitting together in a radically mind blowing way. If nothing else, "The Signal" deserves a spot on the midnight cult circuit for years to come.
Posted by Joe Baker