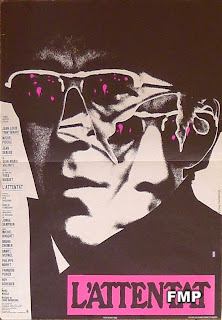 Like the best French thrillers, they move at their own pace, elevating scenario, dialogue and Machiavellian politics above action. Yves Boisset's "L'attentant" (aka "The Assassination" or "The French Conspiracy") is a clear example of this. There are some gunshots and chase sequences, but the ultimate pulse of the film lies in the complicated dynamics of how someone is set up and then the various machinations between state, police and general citizens conspire to see their plan to the end. Ripped from real-life headlines- the vanishing of Moroccan politician Mahdi Ben Barka in Paris in 1965- "L'attentant" mixes an international cast (Roy Scheider, Jean Seberg and every popular French male actor of the time) with a dialogue laden script whose serpentine authenticity feels just as modern today.

Starring Jean Louis Trintignant, he's the slightly complex anti-hero drafted into the plot by a government agency to sell out his friend, Sadiel (Gian Marie Volonte). Upon luring him to Paris and becoming more and more upset at his involvement in the large scale deception, Trintignant attempts to free his kidnapped friend. Like his previous role in Bertolucci's "The Conformist", his character is a man compromised by the state due to the transgressions of his past. While the idea is much more oblique and abstract in Bertolucci's hands, Boisset maintains a fairly rudimentary arch for him in "L'attentant". He plays a man trapped by his past sins during the Algerian War. His relationship to nurse Jean Seberg is affectionate when it needs to be, then savagely distant the next. Like this main charachter, the entire film is a clean, simple affair. Though the revolving merry-go-round of faces can be overwhelming at times, Boisset and screenwriter Ben Barzman maintain control on the narrative. There's nothing flashy or complicated about the mise-en-scene.  Darker themes are hinted at in conventional camera setups, such as one tracking shot that follows an eavesdropper's long walk to a telephone, passing a dozen other men sitting at desks listening to phone conversations.... the insidious nature of the state's agencies developed through a five second clip. This is exactly the type of slow-burn, exposition heavy thriller I appreciate. In fact, the only thing amplified in "L'attentant" is Ennio Morricone's spruced-up score.

Like his contemporary in Italy, Francesco Rosi, filmmaker Boisset seems accustomed to the non dramatic brushstrokes of the political thriller. In "L'attentant" (like Rosi's "Hands Over the City" or "The Mattei Affair"), the currency is not action but the delicate nature of bargaining ﻿and emotional complicity. There's a terrific moment that snaps Trintignant's resolve from being just one of the guys involved in selling out his friend into a committed person to make things right. It's that course of action that propels the second half of the film, and leaves one to wonder if the title of "The Assassination" refers to the political captive or Trintignant's own sinking moral center. It's just one of the delicate pieces examined in Boisset's drama.
Posted by Joe Baker