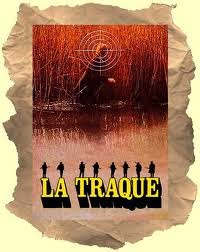 Next to the game of baseball, hunting is the sporting event cinema loves to apply mythological proportions. From Carlos Saura's "The Hunt" to "Deliverance" to especially "The Deer Hunter", game hunting always begins as one thing, then slowly and assuredly morphs into something greater. Serge Leroy's "La Traque" falls squarely into this category. Released in 1975 and starring some of France's biggest names, "La Traque" posits the question just how far can a group of elitist, well positioned men go when they abandon society, become armed and infuse themselves as gods hunting smaller creatures.

The sense of propriety is immediately established as one of the main characters, Jean Luc Bideau, is seen leaving a hotel after spending a night with his mistress. On the way out, he meets American Helen (Mimsy Farmer) and offers to give her a ride to the same country area he's traveling for a game hunt. Once there, Helen is introduced to his other friends... men representing a cross section of society including brothers Albert and Paul (Jean Pierre Mierelle and Phillipe Leotard), financier David (Michel Lonsdale) and Captain Nimier (Michael Constatin). The men have a big weekend of drinking and hunting planned, but the attractive Helen is quickly hit upon and reduced to another part of the weekend. It's only when the brothers Danville find her wandering around the grounds the next day that things turn ugly. Paul forces himself on her... his brother joins in and timid Rollin (Paul Crauchet) stands watch. Things turn from bad to horrible when she manage to get ahold of Paul's gun and shoot him, running off into the woods. From there, Helen becomes the hunted prey as lies become reality and the men spend the next half of the film trying to find her. 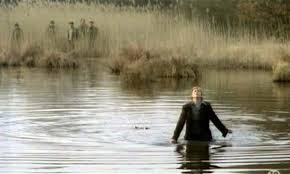 It's here that "La Traque" moves out of its tepid "rape and revenge" category that has somewhat pigeon-holed the film for years and becomes a shifting drama of dynamics between the men. Jean Luc Bideau is running for a high political position in France, and while he wants to reason and understand just how things went sour, the other men led by the remaining Danville brother, simply want to catch and kill Helen to hide their violent crime. Images that initially represented the formation of the hunt for wild boar quickly devolve into France's version of "The Most Dangerous Game". The lean, cold, tree-branched setting of the film and Helen's pained screams and continual out of breath wheezing become the dominant traits of the hunt, ending in a shocking, cold denouement that sends shivers down the spine. The great tag line of "in space no one can hear you scream" is nothing compared to the screams of a woman hunted by the ordinary, eventually faceless men of propriety.