70's Bonanza: The Goalie's Anxiety At the Penalty Kick

Wim Wender's debut feature (minus a few student films) certainly sets the parameters for his long and inquisitive career. Part road movie but mostly an existential drama that raises more questions than it answers, "The Goalie's Anxiety At the Penalty Kick" is a slow-burn psychological thriller that ends with a whimper rather than a bang. Yet not many of Wim's films end definitively. They are about the journey rather than the destination. 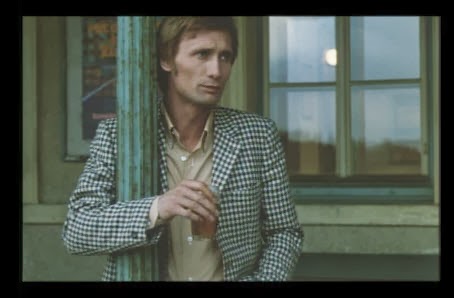 Joseph Bloch (Arthur Brauss) is a goalie for a German soccer team and his anxiety is set up in the opening minutes of the film. He misses a kick and is summarily ejected from the game for arguing with the umpire. That minuscule act sets Bloch on a weird journey. He becomes attracted to a blonde movie ticket girl Gloria (Erika Pluhar), follows her home one night and ends up sleeping with her. The next morning, for no apparent reason, he strangles her and skips town. Bloch ends up in a sleepy country town where he resumes contact with an old girlfriend (Kai Fisher) and becomes involved with the locals, drinking, fighting and, as always in a Wenders movie, listening to rock and roll on various jukeboxes. Wenders never registers a reason for Bloch's cold blooded action, which provides the second half of the film with its tension. Bloch keeps up with the murder investigation of Gloria through newspapers as if he's reveling in his getaway. At the same time, we begin to wonder if this is the beginning of a serial killer, which the film hints at through the disappearance of a local boy. Bloch also comes in contact with several women in the village and our minds begin to wonder when exactly the next murder will take place.

But, as I said at the start, this is an existential effort and nothing else really happens. "The Goalie's Anxiety At the Penalty Kick" is an examination of the tenuous strands that hold us in check through life. Bloch was probably already a little screwed up and it only took a mistake on the soccer field to set him off. And we certainly begin to understand the depths of his depravity when, in a chillingly heightened final scene after long stretches of wandering town, Bloch settles in the stands to watch and comment on a local soccer game. Wenders slowly rises the camera up and away, allowing Bloch to study and criticize the formation of the team, leaving us without closure or even understanding of this enigma. In a long line of cinema crazies, rocketed to their violent outbursts by their lack of tolerance to society- like Travis Bickle in "Taxi Driver" or more recently "Simon Killer"- Bloch is no different. Maybe that's exactly the point.
Available on region 2 Japanese DVD.
Posted by Joe Baker