5. The Sword of Gideon/Munich- Two films, made almost twenty years apart, document the same episode in history as a group of trained men take revenge on the perpetrators who staged the infamous Munich Olympic murders in 1972. While both films are based on the same book (George Jonas' "Vengeance; the Story of an Israeli Counter-Intelligence Team") they go about their storytelling in different ways. "Sword of Gideon". released in 1986 and directed Michael Anderson, is a bit more low-budget as it was originally aired on television (and never available on DVD by the way). Starring Steven Bauer, Michael York and Rod Steiger, "Sword of Gideon" remains an ambitious TV project. "Munich", tackled in 2005 by Steven Spielberg, ups the ante, of course, in production value and the thriller aspects- although both films representation of a telephone bomb are riveting. Starring Eric Bana, Daniel Craig and Ciaren Hinds, both "Munich" and "Sword of Gideon" are terrific examples of the men-on-a-mission genre in the way they portray the dissolving morals of the men as they embed themselves deeper into their mission. 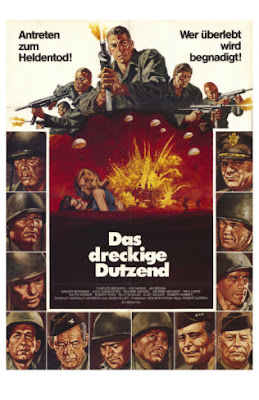 4. The Dirty Dozen- After watching this again for the first time in years, I’m reminded how much of a genre-stealing hack Quentin Tarantino really is. With an all-star cast, Aldrich basically upped the ante on the “men on a mission” war genre that would see itself re-invented and re-imagined for years to come- and on both sides of the ocean as well. The great conceit in Aldrich’s adrenalized affair is just how long he spends humanizing the ‘dirty dozen’ before their fatalistic mission to wipe out the German high command at a Paris chateau. Nihilism doesn’t begin to describe the lengths Aldrich goes in that final battle, and its all very non-Hollywood, which probably earns the film even higher regards nowadays. This was 1966 and we’re treated to Lee Marvin sadistically trying to break off the vent hoods so his men can drop grenades down into the underground hideout of the German men and their party-goers. As an action film, “The Dirty Dozen” is aces. As a film that successfully inverts our expectations about the ‘good guys’ and ‘bad guys’, it’s a revelation. Probably the prototypical men-on-a-mission film that almost everyone identifies with. 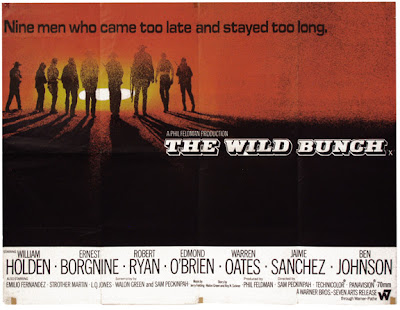 3. The Wild Bunch- Like "The Dirty Dozen", Sam Peckinpah's "The Wild Bunch" was a game changer for Hollywood, especially in its cinematically ritualized violence and bloodshed. What begins as a western ends up as a dead-mans-walk when the bunch in question take on the whole Mexican army. Stellar, grizzled performances by William Holden, Warren Oates (always stellar and grizzled!), Ben Johnson and Robert Ryan push the human element in this one as we sorta begin to root for these bad guys. 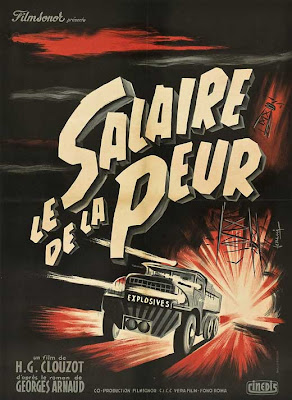 Henri Georges Clouzot's 1953 film about a group of men hired to transport a truck full of nitroglycerin across a rugged South American jungle is such an underrated film. The tension reaches unbearable lengths and sweat, grime and an almost silent cinema mise-en-scene overtakes the second half of the film. I regret to say I've never seen William Friedkin's remake, titled "Sorcerer" due to a terrible DVD print, but I may have to buck up and bear it soon. As it stands, "Wages of Fear" is a classic men on a mission entry.

Brian DePalma's (usually) maligned cops and gangsters story remains one of my favorite movies. Featuring a sweeping Ennio Morricone score, two of the most perfectly realized setpieces ever (the bridge raid and train station shootout) and Al Pacino hamming it up as Al Capone, "The Untouchables" real momentum lies in its representation of real life gangster busters led by Kevin Costner. Teamed up with the veteran (Sean Connery), the book worm (Charles Martin Smith) and the sharpshooter (Andy Garcia), they slowly but surely take back Chicago from the gangsters. I've seen this film over a dozen times and it only grows in my estimation each time.
Posted by Joe Baker