Tuesday Weld is just beautiful... and that beauty makes it all the more heartbreaking in the way she stumbles through her days in Frank Perry's dark deconstruction of a Hollywood starlet's psyche. Released in 1972 (and never available on DVD, although the Sundance channel once had it in its rotation about 6 years ago), "Play It As It Lays" is a fragmented and very loose character study as Maria (Weld) has her marriage to hotshot director Carter Lang (Adam Roarke) dissolve early in the film. She then faces an abortion, whose sounds and images are replayed like bad nightmares throughout the remainder of the film. Her best friend, a producer played tremendously by Anthony Perkins, is there for long walks on the beach and drunken conversations, but he can barely stand his own insufferable existence and eventually, Maria has nothing better to do than hang around the desert set of her ex-husband's new film and shoot live ammo with the stunt coordinator. Yes, "Play It As It Lays" borders on the misanthropic side, to say the least, all held together by a swooning visual style that heightens the smog across Los Angeles and plays like a feminist version of a later Brett Easton Ellis novel. Even the shadowy chauffer who leads her to her bayside abortion is more worried about the gas mileage of her corvette than her state of well being. 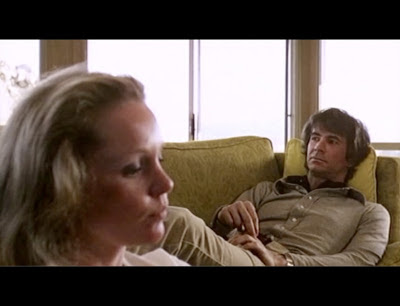 Based on a short story by Joan Didion and with a screenplay by Didion and John Gregory Dunne, "Play It As It Lays" makes for a startling double feature of mid-life crisis when paired with director Perry's previous film "The Swimmer". In that film, Burt Lancaster is on an almost mythological adventure as he's trying to swim home through the backyard pools of his neighbors, getting caught up in their waifish lifestyles and obviously running from something himself. Also not available on DVD, "The Swimmer" is an amazing film for 1968 whose message is oblique yet somewhat disturbing. In "Play It As It Lays", Tuesday Weld reaches a state of emotional and physical paralysis at one point which prompts Anthony Perkins to remark her state of "catatonia" is not pretty. Like Lancaster, Maria is a stunted individual suffering through the empty Southern California lifestyle. But what makes her story more damaging is the fact she does hold out some hope for a brighter future as her young daughter is confined to a children's home for unspecified reasons. In her fractured voice over that frames part of the film, no answer is given for this although we know she deeply cares for her daughter as it seems to be the only part of her life that means something, held out in her mind like an oasis from the shit of SoCal. 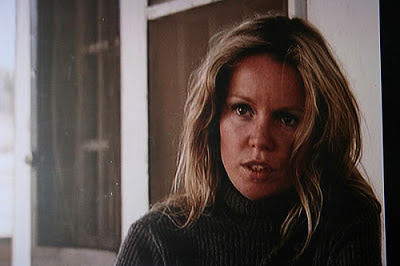 ﻿As stated here many times, filmmaker Frank Perry is such an under rated talent, equally depressing that his very adult films are rarely available on home video distribution, "The Swimmer" and "Play It As It Lays" being front and center. By the time Tuesday Weld, hair messy and eyes wide, stares straight into the camera and answers her off-screen director to break the wall between film and confessional in the final scene of "Play It As It Lays" attests, there are beautiful disasters still waiting to be discovered.
Posted by Joe Baker

The DVD available from Modcinema.com is full-length and wide-screen. Picture quality is high.