The Yoshitaro Nomura Files: The Castle of Sand

Yoshitaro Nomura's 1974 police procedural "The Castle of Sand" is an intensely microscopic view about the search for a killer where dead ends become routine and several narrative strands are shown in unison. Like the best procedurals, including "Zodiac", "Memories of Murder" and "The Day of the Jackal", "The Castle of Sand" examines the doggedness of several people to bring justice against a heinous act. And by mentioning those three illustrious films, I hold that Nomura'a film belongs alongside them.

After a 60 year old man's body is found bludgeoned to death in a rail yard, Tokyo detectives Imanishi (Tetsuro Tanba) and Yoshimura (Kensaku Morita) are assigned to the case. Having little to go on besides a brief conversation overheard in a bar that may have featured a certain word spoken in a certain Japanese dialect, the detectives embark on a frustrated investigation that yields little advancement. Over time, the younger detective Yoshimura is re-assigned, but elder policeman Imanishi continues with the case, eventually uncovering a sordid family drama that would feel right at home in a Shakespearean play. 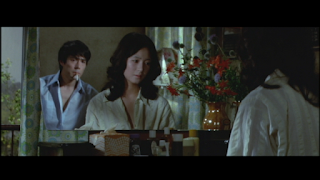 Nomura, whose films are barely available here even though he directed over 35 of them, released "The Castle of Sand" in 1974, several years before his biggest hit "The Demon" in 1978. Given a bare bones DVD release that features some shoddy subtitling, "The Castle of Sand" is one of those films whose visible greatness lies in its unassuming narrative. At two and half hours, "The Castle of Sand" could be called epic, especially in the way it's final third plays out. With the killer identified, the police detectives plead their case for a warrant, spelling out the mystery we've been trying to uncoil for over 90 minutes. With blaring orchestra music overplaying the images, Nomura visualizes the development of a killer in a protracted, numbing sequence that swerves into melodrama and back with ease. It's a stunning third act that not only redefines the root cause of evil, but questions what exactly evil is. "The Castle of Sand" raise these intriguing questions, but it also succinctly proves that there's no fury scorned like that of a frustrated detective.
Posted by Joe Baker