It's been a good couple weeks at the movies. After the cinematic lightning bolt that was "The Master", Rian Johnson's wholly original and compelling sci-fi/western hybrid "Looper" made a remarkable impression on me. While initially unmoved by Johnson's debut film, "Brick", I became a strong convert a few years ago after his sophomore film, "The Brothers Bloom", ranked high as one of the best films of its respective year for me. Each successive effort has seen Johnson grow stronger and more secure as a filmmaker. If "Brick" was a modern film noir diluted through the emo tendencies of teenagers and "The Brothers Bloom" was a 1930's caper film, highlighted by bubblegum aesthetics and an almost child-like attention to puppy love, "Looper" is darker, easily borrowing from both the sci-fi dystopia genre and western. And it has alot on its mind, eventually turning into a dynamic examination of violence, revenge and that sticky scenario known as time travel. 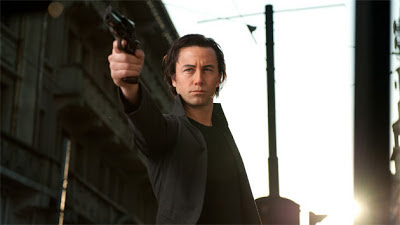 Much has been made of the (at times) distracting make-up work by young Joseph Gordon Levitt to look like his older self, Bruce Willis, and the subpar special effects, yet part of me feels that based on Johnson's previous affectations for older genres, this is an intentional thing. Going into "Looper", I expected a slick genre exercise and came out with a completely different outlook. About halfway through "Looper", perspectives and character shift and the stakes get unbearably high, anchored by strong performances from Levitt, Willis and Emily Blunt as the violence focuses away from the sci-fi universe carefully established by Johnson in the first half of the film. Basically, things get personal on many levels and the ramifications of the violence extends light years. One of my favorites of the year.
Posted by Joe Baker