Hustlers in the movies always have such an exhausting effect on me. Whether it's Jason Miller in the hugely underrated "The Nickel Ride" or more well known con men like Dustin Hoffman in "Midnight Cowboy", I always wonder just where they find the energy and veracity to shake and move 24 hours a day when steady income could be had with a 9 to 5 job. But I digress. Francis Megahy's "Freelance" documents the troubles of yet another hustler, this time portrayed by the charismatic Ian McShane. Coming to real success only in the last decade or so due to his tremendous performance as Swearingen on HBO's "Deadwood" series, I've seen McShane in a number of his early roles and he certainly holds his own as a handsome and often tragic supporting player. With "Freelance", McShane is thrust center stage as the wheeling and dealing Brit who happens to witness a murder by the underworld and then tries to carry on his various deals while avoiding the same hit man. Of course, this complicates his live in romance with model Gayle Hunnicutt and her plans to settle down into a normal life. 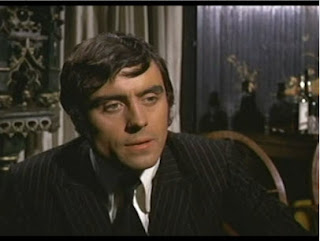 "Freelance", eventually released on VHS in the United Sates in the early 90's as "Con Man", is certainly a product of its time... which means lots of Swingin' London (including a threesome between McShane, his best buddy and a waitress they pick up) and a pretty terrible folk song that lingers over the opening and closing moments. Yet, as one of those grubby early 70's revenge flicks like "Sitting Target" (in which McShane co-stars) or "Get Carter", "Freelance" more than holds its own as a minor crime film in which most of the film's pleasure is watching McShane sweat and escape from the relentless hit man trying to wipe him out. Directed by Francis Megahy (who really did nothing else of note), "Freelance" occasionally pops up on cable television. And it does feature one of the more impressive ways to break into a window that I've ever seen on film.
Posted by Joe Baker