A Man Pushed to the Brink- Twice

Certainly a jazzed up and more thud-inducing affair than the BBC miniseries its based on, director Martin Campbell does take a few liberties with the late Troy Kennedy Martin's script, adding some modern touches and eliminating alot of the longueurs as Detective Craven (Bob Peck) pines for his murdered daughter. After all, I do expect some tinkering with a story that was originally allowed to live and breathe over 5 hours in its original form, now reduced to just under two. What I didn't expect was the lengths that Campbell would go to in presenting his updated anti-hero (a very good Mel Gibson) as a tragic and unstable loner that truly pushes the film over the edge in its final scenes. The same basic shadow organizations of nuclear weapon skulduggery and governmental intrusion serve as the 'baddies', yet this 2010 version of "Edge of Darkness" coalesces with the times. The violence is bracing and unsparing, the actions are quick and the corruption brims to the surface faster than one can say Enron. 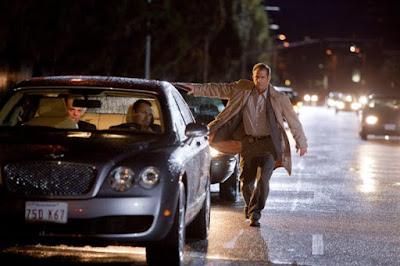 The one disappointment in the latest incarnation lies in the performance of Brendan Gleeson as the side-shifting spook, Jedburgh, portrayed to magnificent dimensions in the original by Joe Don Baker. Gleeson does his best with the limited role (again, 5 hours into 2), but it's the performance of Baker that sells the original miniseries as something closer to the truth. More so than the Bob Peck Craven character, his is the more tragic of the two. Kennedy Martin's original script has Craven lose a daughter, but its the shifting loyalties and anecdotal lines of Jedburgh that results in him losing a lifetime and a country. It's a beautiful arc for a complicated and diverse character, and there's only a hint of that in Campbell's reworking. One gets the sense that in 1985, the intention of the "Edge of Darkness" miniseries was to rally behind some strong political ideals while unwittingly blazing a trail for how marvelous a television miniseries could be. The intentions of this latest "Edge of Darkness" couldn't be farther from that grand purpose. That doesn't make the film any less worthy, though. On it's own, "Edge of Darkness" is a delightfully sordid film that should reward the fans of the original while creating new followers with Gibson's bat shit crazy wandering into full-on revenge mode.
Posted by Joe Baker

A most enjoyable blog. I'm adding a link from mine.

Thanks for reading. I checked out your blog as well and it seems we share some taste in films.

オテモヤン said...
This comment has been removed by a blog administrator.
5:40 PM