I do hold a soft place in my heart for spy movies. While there's always room for the gaudy jet setting Bond adventures with its fantastic toys, ironic dialogue and cheeky performances, the spy movies that really get my heart racing are the more subdued, cerebral efforts. I think specifically of Martin Ritt's wonderful "The Spy Who Came In From the Cold" or Sidney Lumet's "The Deadly Affair"- films that have nary a gunshot but overwhelm with paranoia and careful exposition. John Huston's "The Kremlin Letter" falls squarely into this category, upping the ante in nihilism and quick-speak that throws the viewer into the middle of an elaborate operation inside Communist Russia within the first few minutes. Codewords are thrown about casually with little information. A car drives off a cliff and explodes. What, at first, seems like a hodgepodge of spy experts, soon turns into a cryptic series of assignments and double crosses. It's all stirred up masterfully by a director who understands how to get out of his own way and present the story with straight precision. 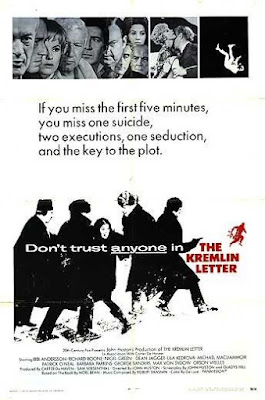 Starring Patrick O' Neal as a Navy commander thrust into the spy world due to his intelligent ability for memory and information gathering, he's soon charged with gathering a rag-tag bunch of operatives from around the world, including Nigel Greene, George Sanders (in a pretty racy role), Ronald Rabb and Barbara Perkins as the daughter of an aging safecracker whose taught the rules of the trade to his daughter. The target of the mission: Russian baddies Orson Welles and Max Von Sydow. The premise is ordinary, yet "The Kremlin Letter" burrows deep beneath the surface as an excercise in hidden agendas. The operating leader, the great Richard Boone, pops up from time to time to as if he's a circus ringleader cheerfully leading lions to the slaughter. It's really his film. And if nothing else, "The Kremlin Letter" is a trendsetting spy film that weaves an intricate web, only to upend the whole thing in the end by a series of 'reveals' that posits the whole screwed up mission as nothing more than a personal political charge against old buddies.

Released in February of 1970, "The Kremlin Letter" was generally regarded as a flop for director John Huston. He would rebound a couple years later with the equally opaque character study called "Fat City" (another of his films not readily available on DVD, like this one), but "The Kremlin Letter" has recently undergone some critical re-evaluation. It was slated for a DVD release in 2005, then scratched due to a substandard print of the film. In this age of self reflexive cinema, "The Kremlin Letter" would fit in nicely as a re-emerged, articulate spy film whose smoke screen narrative thrust has probably been emulated the world over for decades now.
Posted by Joe Baker

We've browsed through your reviews and thought that they are really original and interesting! We would like to invite you to publish your reviews on 7tavern.com, which provides an alternative platform for promising movie reviewers to showcase their talents. In addition, you'll find a growing community of bloggers who share the same passion for excellent movies! Based on the merit of your reviews, we intend to offer you exclusive publishing privileges on our website!

Please feel free to contact us to discuss our proposal. =)