Hi Defness: The Good The Bad and The Ugly

Sergio Leone's second masterpiece (behind "Once Upon A Time In The West, of course) was a disc I picked up on a whim... partly to test the limitations or advances within the Blu Ray format on a movie that's over 40 years old. After all the recent hullabaloo over William Friedkin's transfer of his early 70's film "The French Connection" to the hi-def format, which acted as a massive warning flare that the tampering of older films transferred to Blu Ray could impart some division lines between aficionados and filmmakers, I was curious to see the results for myself on a film even older than Friedkin's. So it's with great enthusiasm that I proclaim the transfer of Leone's western as a blockbuster effort. Not only has the sound quality been bolstered, but the lavish, cluttered and dry images of Leone's gritty landscapes are crisp and clean representations. 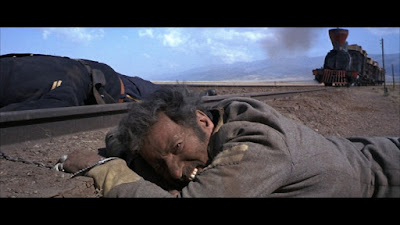 Honestly, I don't know if anything could really ruin the look and feel of "The Good The Bad and The Ugly". I've seen the film a handful of times, twice on the original DVD released in the early 2000's, but mostly through the awful pan and scan version that routinely run on TBS or other cable stations. It always seemed to be the film that I'd catch at 3 'o' clock in the morning while suffering from sickness or insomnia. The bar for Hi-def was set very low. 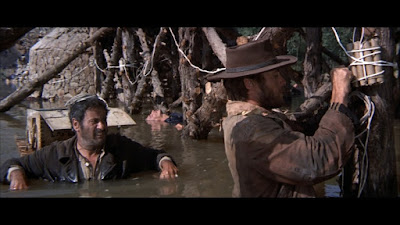 For all intent purposes, if there's a 60's/70's filmmaker destined to gain more from the advances in DVD production, it would be Leone. As a visualiser who works in the extremes, Blu Ray just makes sense. Whether its the protracted opening in "Once Upon the West" or the lazy introductions of his three principal characters in "The Good The Bad and The Ugly" (which takes up to 40 minutes), Leone's camera alternates between long shot and extreme close-up with the ease of a piano player hitting all the right notes. This hi-def version accentuates the shadows of the long shot and envelops us in the wrinkles and scars and sun-burned flesh tones of the close-up like never before. I know I've used this saying before and it probably loses its effect with each Blu Ray post, but certain scenes in my Blu Ray copy of "The Good The Bad and The Ugly" made my jaw drop. The gravel beneath their feet becomes a second character. The stained walls and decrepit wood that clutters so many of the sets vibrates with personality. Watching this film now is an immersing experience in the best sense. The real mystery now remains: if this is the potential for future films, why would I ever want to watch TBS again?
Posted by Joe Baker