Hard To Find- Frankenheimer's "The Challenge"

I've long been a fan of director John Frankenheimer, and until very recently, only two of his films have eluded me. The first was 1968's "The Fixer", and the second was this early 80's actioner entitled "The Challenge". Starring Scott Glenn as an American boxer persuaded to travel to Japan carrying a sought after sword, "The Challenge" is a worthy entry into the 80's cinematic fascination with the honorable mysticism surrounding the ancient cultures and practices of Japanese swordsmanship (see also Sydney Pollack's "The Yakuza" and, dare I say it, the "American Ninja" series). 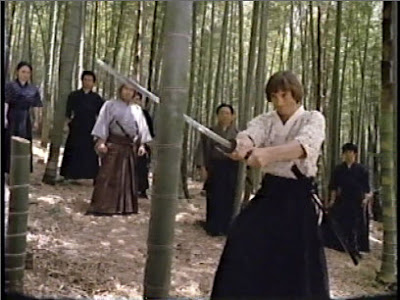 Shockingly violent at times, "The Challenge" fits nicely into Frankenheimer's divided canon. Made long after his "important" contributions to 60's cinema and 70's oddities, "The Challenge" could be regarded as his return to genre. Some film enthusiasts claim Frankenheimer lost his way during this period, but his downright stark and brutal immersions into ordinary genre cinema, I feel, are some of his strongest films. Not only is "The Holcraft Covenant" a solid spy film entry, but the nihilistic attitudes of his next two films, "52 Pick Up" and "Dead Bang", stand apart from their late 80's action cinema siblings. There weren't many grand themes in these films, but they manage to crawl under your skin and linger there longer than, say, "Raw Heat" for sheer 80's brawn. In "The Challenge", Glenn is the outsider caught up in a family squabble over an ancient sword. Continually shifting allegiances, falling in love with the daughter (Donna Kai Benz) of the two feuding uncles, and eventually settling on the life of a trained swordsman, Frankenheimer is obviously had a blast framing his hectic foot chase sequence along the streets of Japan and a final battle in a post-modern architecture high rise. 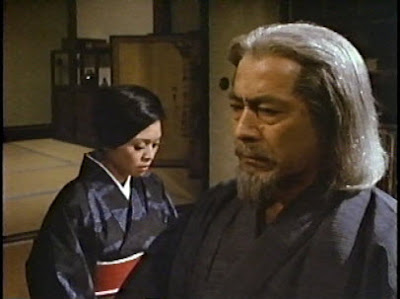 There are a few recognizable themes in "The Challenge"... the most present being the idea of the traditional butting violently against the modern. The two feuding brothers came from the same world, but they now exist (and rule) in vastly different places. The great Toshiro Mifune plays Toru, head of the calm mountain retreat that eventually teaches the American outsider the ways of the sword. Never leaving his kimono and showing his pupils how to slice a tree down with one swing of the blade, Mifune lends his always quiet gravity to the role. His brother, Hideo, played by Atsuo Nakamura, works and lives in a state of the art high rise whose every inch is covered by surveillance cameras. In one of the scene's most thrilling moments, the clans face off in a bamboo tree forest, one group standing placidly among the trees while the other shows up in sleek black limos, armed to the teeth with machine guns. It's visually rich idea that continues to propagate throughout the film. Secondly, Frankenheimer revisits his fascination with individual punishment, locking Glenn in the ground buried up to his head after an aborted attempt to steal the sword for Atsuo's henchmen. Not since the lengthy and gut-wrenching detox sequence of Gene Hackman in the criminally underrated "French Connection 2" has a lead character suffered such a deprived week. For an 80's 'actioner', it has Frankenheimer's stamp all over it.

The other jarring aspect of "The Challenge" is it's brutally quick violence, none more so than the final stand off that bursts off the screen with chaotic fury and a roving camera that allows for low angle shots to simply observe the action in all its messy glory. Watching a sequence like this reminds me how much I despise the current theology behind editing.... cut every half second and piece it together with no perspective. In "The Challenge", we feel every slash and experience every grunt and groan. It was worth the wait. Next up.... "The Fixer".
Posted by Joe Baker

Labels: Not On DVD, reviews