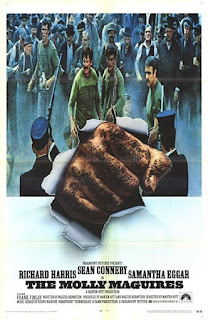 5. The Molly Maguires (1970)- Written about here. From James Wong Howe's many seamless tracking shots to the grimy atmosphere that reeks of rain, mud and coal, this is one hugely under appreciated Martin Ritt effort. Taking the most elemental crime film trope (cop goes undercover to penetrate a group of 'terrorists'), "The Molly Maguires is also a bracing psychological experiment as good guy Richard Harris begins to fall in love with the enemy and even empathize with him. None of the performances are showy, and Sean Connery (as the leader of the Molly Maguires) seethes and rages with just the right amount of dignity. See this film soon. 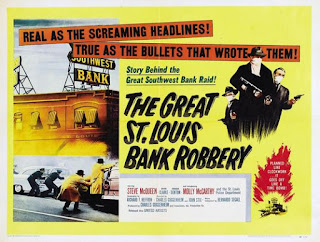 4. The Great St. Louis Bank Robbery (1959)-A virtual 'one off' for playwrights Charles Guggenheim and director John Stix, this is one twisted and way-ahead-of-its-time crime thriller. Starring a young Steve McQueen as the novice driver for a group of older criminals, "The Great St. Louis Bank Robbery" feels like the closest thing America had to the pivotal noirs of Jean Pierre Melville. Plenty of ominous scenes with men standing around in trench coats, "The Great St. Louis Bank Robbery" is an efficient and tight document of the tireless preparation put into the job by these grizzled veterans. Toss in some subverted homosexuality, a single four minute monologue by one of the criminals about his past, and a baroque bank robbery finale and you've got yourself one nasty little treat. Written about here. 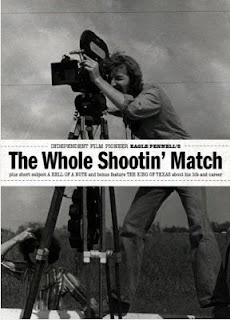 3. The Whole Shootin' Match (1978)- Thanks to Watchmaker Films for allowing some of Eagle Pennell's early films to see the light of day. A bonafide Texas legend, this debut film from 1978 charts the lackadaisical scheming of two Texas layabouts (Lou Perryman and Sonny Carl Davis) over the course of a few days. Hugely inspirational for a whole generation of filmmakers who routinely create entire films about "hanging out", "The Whole Shootin' Match" deserves its now iconic status. Read my thoughts about it here. 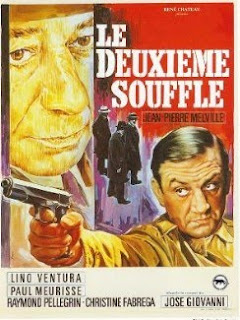 2. Second Breath (1966)- Slowly but surely, the exhilarating films of Jean Pierre Melville are creeping out on home video. '09 saw two more titles (this one and "Le Doulos") added to the slate. Made smack in the middle of his continually rich film noirs, "Second Breath" simmers with the same ideas of loyalty, love, betrayal and misguided honor in the French underworld. This is a film that needs to be seen twice. Once to appreciate the spiraling trends in the narrative, and a second time to immerse oneself in the fatalistic attitude and glorious black and white cinematography. Hence the title. 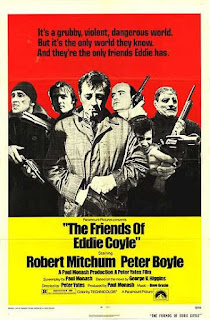 1. The Friends of Eddie Coyle (1973)- The crowning achievement of new to DVD films released in 2009, Peter Yates' crime drama concerns itself less with the magnanimous stardom of Robert Mitchum (as the titular Eddie Coyle) and more with the related activities of secondary characters as Coyle struggles with the impulse to 'flip' on them and save his own skin. The film is a deliriously good exploration of the Boston underworld, featuring two impressive set pieces (a parking lot stake out and Eddie's final hockey game). I've been hearing about this film for years, and it now stands as one of the true classics. Covered here.
Posted by Joe Baker

this is a cool idea - I might try this myself... it would be very German, though, this year...

"Deuxieme Souflle" was great, but I think I would lean more towards "Le Doulos" - everything clicked in that film. I love Melville though...My only disappointment with him so far is the collaboration with Cocteau on "Les Enfants Terribles". Not sure if was just bad execution or poor compromises between the two of them, but I found little to enjoy in the whole experience.

"The Great St Louis Bank Robbery" sounds great - who doesn't love a good heist? Can't find it at zip.ca, but it's now firmly on the list.

I love doing a recap of older films seen in a year as well (I combined both lists - old and new - into a single 2009 wrap-up post). My fave was the insane 1977 Japanese Horror-Freak Out-Comedy-Experimental-Art Film "House" (coming to Criterion this year). Love at first sight...

Sam, I could've listed 10 or so of the GREAT Fritz Lang films I watched this year, but I tried to keep the list limited to films that had their long-last debut on home video in '09.

Bob... confession... this was probably inspired by the list you put up last month! And good news that "House" can be seen by more of us now.