There's no real reason for choosing Alan Parker's baroque noir as the second Blu Ray film to discuss on this blog. I'd seen it once years ago, and it just sorta called out to me while scrolling through a list of recently released Blu Ray titles. Watching it now, years later, and in the midst of Mickey Rourke's second coming as an actor, "Angel Heart" doesn't deserve it's diminished status as the film that almost received an X rating due to its steamy sex scene between Rourke and actress Lisa Bonet- and I have to report, the scene is just as erotic and weird as I remember it. There's lots to love about Alan Parker's film, especially due to its downright steamy atmosphere and casual disregard for playing the noir genre by the rules. 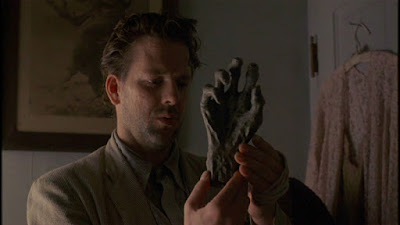 Locating itself in 1955, "Angel Heart" uses the established noir genre for about 30 minutes before jumping off the deep end, bartering in eerie dream images, abandoned wintry coastlines and psychic paraphernalia instead. Hired by a dark suited man named Louis Cypher (Robert DeNiro), Chicago private investigator Angel (Rourke) soon finds himself in the deep bayou country of New Orleans tracking the whereabouts of an elderly big band singer. Complicating things are the dead bodies that routinely pop up after Angel questions them. Then there's the sultry presence of Lisa Bonet as the possible daughter of the missing man. In hindsight, one can easily brush off the image-change Bonet was trying to facilitate in 1987. Reinventing herself from the iconic status of the oldest Cosby daughter into a sexually voracious voodoo practitioner with a sex scene drenched in dripping blood was probably more of a hurdle back in '87 then it would be now where celebrity status is bathed in blood and sweat daily. And her intentions are clear from the first time we see her: as she washes her hair on an outside faucet, the water runs down and wets the thin shirt around her body, leaving nothing to the imagination. It's times like this I'm especially grateful for Blu Ray.

And that's the real reason for this post. Any film lover will probably already know the outcome (and twist) of "Angel Heart". A film such as "Angel Heart" feels refreshing on Blu Ray. A good deal of its running time is located indoors, along the dank French Quarter 'antiqueness' where the shadows and physical age can usually be hidden on standard editions. In Blu Ray, those black corners and sunlight steeped window valances that spray light around the room act as a second character. You can feel the atmosphere in the frame. Likewise, the film's early moments as Rourke swaggers around downtown Chicago take on a blistering quality as the various billboards and signs in the background pop with vibrancy. Both locations, New Orleans and Chicago, serve as diametric opposites in Angel's dogged pursuit of singer Johnny Favorite and the Blu Ray format does justice to both.
Posted by Joe Baker