Lone Scherfig's "An Education" takes a prominently well-spun idea and turns it into something aching and real. The May-December romance (this time with a 16 year old schoolgirl and a suave older man) plays out with sincerity, mostly due to the very strong acting by newcomer Carey Mulligan. In just a few lines of dialogue, "An Education" sharply brings into focus the canyon of differences in lifestyles, world views and knowledge between the wide-eyed youngster and her well versed suitor. When David (Peter Saarsgard) asks her what her plans are on Friday, Jenny (Mulligan) replies with the naive answer of "I'll be in school". David smiles and says, "I meant Friday night". The gulf of experience that so many films spend 90 minutes trying to explain, writers Scherfig and Nick Hornby dispense with naturalism in 90 seconds. The rest of the film- as we watch Mulligan become introduced to some hard choices in life- simply soars from there. 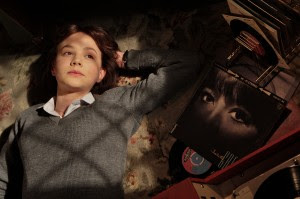 In the tradition of stuffy, 1960's era British family dramas, "An Education" adheres to the formula. It's not a flashy movie, but one that opens itself up through wonderfully acute performances and textured reaction shots. I wouldn't bat an eyelash if every actor in this movie received an acting nomination of some kind. Already mentioned in breathless quotes throughout the film scene, Carey Mulligan as Jenny steals the show. But it's the secondary characters who provide dimension to the film. From Alfred Molina's overly protective and single-minded father (who pulls his character out of shrill territory with a moving monologue towards the end of the film) to Sally Hawkins (who only pops up in one 2 minute scene, yet runs circles around most everyone else in the film), "An Education" positions itself as a character study of the highest order. This is precisely the intimately made little film that keeps me going to the movie theater in search for something redeeming.
Posted by Joe Baker