I really have no excuse why it’s taken so long to watch Masaki Kobayashi’s 1964 precursor to the now prolific J-horror wave, “Kwaidan”. Less about outright scares and more concerned with the slow-burn atmosphere and mood that surrounds the age old ghosts stories that the compendium film tells, “Kwaidan” is also visually sumptuous. Told against the artificial backdrop of lively painted sets, the film features tales with ominous names such as “The Black Hair” and “The Woman of the Snow” that center on the scorn of betrayal within relationships. Each one of these four tales have roots in mythic storytelling and they’ve been done countless times over since, but watching the original source is still entertaining.

Taking two of the most successful genre types of the recent years (the bad Nazi and the zombie picture) and merging them into a blood-splattered, playful exercise seems like a can’t miss formula. And for the most part, Tommy Wirkola’s Norwegian horror film “Dead Snow” succeeds. His penchant for self reflexive humor is obvious (and a bit much at times as the characters want us to know how hip they are by referencing “The Evil Dead” and quoting Indiana Jones), but this is certainly not a film for strong character development. The 7 med students who travel to a snowy mountaintop cabin and find themselves sitting on a box of dead Nazi gold are nothing more than ciphers for the bloodletting. The make-up is especially inventive and creepy. And as the final (insanely bloody) 30 minutes rolls, the parenthetical homage to Raimi and Peter Jackson are quickly matched. Fun stuff. 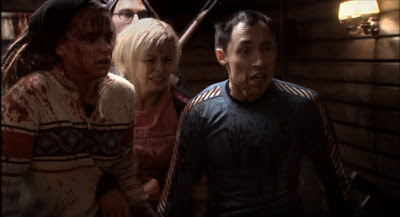 When one of the main stars of a film is the portly and weird Sidney Lassick, the bar isn’t set very high. So as it is with this 1980 film about three reporters who become trapped in the house of a deranged brother and sister… and with something evil lurking in the basement. There’s no subtext at all here. The idea of female empowerment ala “The Descent” or a trip into true madness are both avoided here. Instead, “The Unseen” is a pretty boring and harmless 80’s oddity.

With several high profile credits to her name- and a potential Oscar run on her hands with this year’s “The Hurt Locker”- 1987’s “Near Dark” remains, for my money, Kathryn Bigelow’s best film. Merging the western into a type of gothic horror (oh how pretty those sunlit Texas plains quickly turn into darkness as a Winnebago stalks across the landscape), Bigelow upped the ante on the modern vampire flick and created something very naturalistic and frightening. The sexual tension between Mae (Jenny Wright… what happened to her??) and Caleb (Adrian Pasdar) sets the framework for a tragic love story filled with blood, gore and broken mythology. I watch this every year and damn if it doesn’t get better and better. 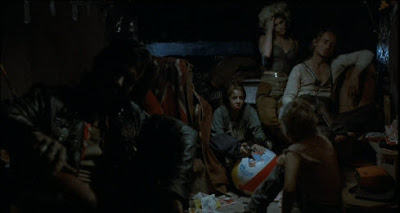 A cerebral zombie picture of the highest order, Bruce McDonald’s “Pontypool” is an effective one set character piece that dazzles and elates with words and ideas rather than gore. The picture I chose as the screen cap below is grossly overselling the bloodletting. As a Don Imus like radio DJ, Grant Mazzy (Stephen McHattie) stumbles into work one day and is plunged directly into an apocalyptic catastrophe as it builds in the outside world. Trapped inside the small Canadian radio station with Mazzy is his producer Sydney (Lisa Houle) and assistant Julia Ann (Georgina Reilly). Broken cell phone calls, unintelligible babbling from callers and off-frame noises slowly integrate the evolving madness upon the isolated radio station. “Pontypool” is a revelatory zombie picture, although writer Tony Burgess and McDonald are careful to avoid the use of the word zombie at all. The virus spreads through the use of the English language, which in and of itself poises just as many questions as the film answers. It’s all heady stuff, to be sure, but immensely pleasurable and challenging. 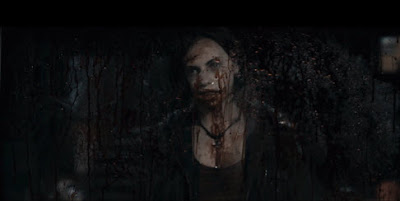 Dinner With A Vampire

The first 45 minutes of Lamberto Bava’s “Dinner With A Vampire” eschews the cheesy Italian horror genre by playing with the ideas of showmanship and successfully copying the black and white eeriness of Murnau’s “Nosferatu”. The second half becomes, well, a cheesy Italian horror film complete with bad dubbing, confusing scene changes and continuity errors (a female wearing stockings one scene, bare legs the next, then back to stockings!). 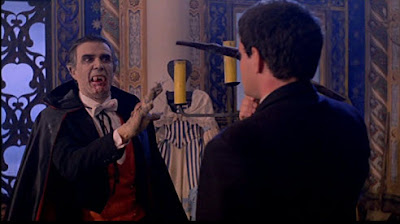