DVD Shout Out: Eye In the Sky 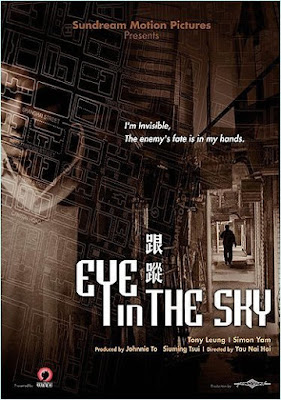 Remember how great the scenes of Gene Hackman nonchalantly tailing suspected drug lord Fernando Rey were in "The French Connection"? Stretch that tension out to 90 minutes and one gets the sense of excitement conveyed by Nai Hoi Yau's 2008 policier, "Eye In the Sky". With a stripped down premise- a group of elite detectives whose job it becomes to perform surveillance on a group of suspected jewelry thieves- Yau's little seen film is full of great moments. Our entrance to this technologically savvy and intelligent world of body language and casual street tactics lies in the role of newbie Kate Tsui as she's promoted to the surveillance unit, led by father-figure Simon Yam. Along the way, we understand how important it is to observe clothing and street names as well as the understated hand movements that signals danger to fellow police officers. "Eye In the Sky" is just as educational as it is entertaining. The target of the investigation is master thief Chan (Tony Leung), whose just as efficient and well-versed in his chosen trade (crime) as the cops trying to track him. But the real crux of the film lies in the relationship between Tsui and Yam. He's tough one moment because she needs to learn the job, then gentle the next (especially in a riveting moment when he cajoles his tired, bored surveillance crew with a long joke through their hidden earpieces).

Yau, longtime screenwriter and collaborator with Johnny To, who produced this film, evidently learned his craft from the best as well. Filmed with simple setups and an eye for sharp editing that doesn't jumble the images up, allowing the viewer to completely understand where everyone is in relation to their prey, "Eye In the Sky" fits neatly into the Milkiway/Johnny To subsection of compact, energetic and consistently well executed genre films.
Posted by Joe Baker