I suppose one could make top 5 lists of the best rock documentaries (with the release of "Cadillac Records" this week) or the top 5 Mickey Rourke performances, but how much fun would that be? And apologies to any fellow bloggers who actually have made any lists like that. I wanted to go in a different direction. After recently watching Robert Altman's much maligned (but not altogether bad) 70's sci-fi film "Quintet", the idea hit me. How many good- or at least highly enjoyable guilty pleasures- are out there that feature this style of medieval hunter and prey narrative? Or as I affectionately call them, the death game genre. So, since my previous Top 5 list counted down the best Nazi hunter films, here's another offbeat list of films for you. Feel free to add any I missed. After number one, in no preferential order:

1. Battle Royale- Kinji Fukasaku's modern cult classic gets better every time I watch it. From the exaggerated kill scenes to the menacing sexuality of Chiaki Kuriyama, (who Tarantino requisitioned for his own romp through Asian theatrics in "Kill Bill"), "Battle Royale" is best seen with a crowd, preferably after midnight and with a few beers. In Japan, society is rapidly becoming overcrowded, so the government's idea is to randomly choose one class of school children, deport them to a secluded island booby trapped with all types of grotesque land mines, and have them pick each other off one by one with various weapons handed out in nap sack. Ridiculous, yes, but wildly entertaining in the right frame of mind. "Battle Royale" came much later in the death game genre, but it's pretty much become the definitive example. 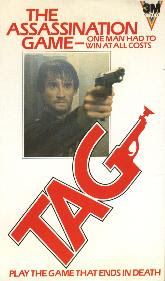 2. Tag: The Assassination Game- If you've seen this film, then I think there's an unwritten law that you have to like it. I watched this compulsively as a kid in the eighties, and it's long overdue for a re-watch now. A small group of kids on a college campus form a game where they use fake guns with darts to hunt and assassinate each other. The only problem is, one of the group takes his losing way too seriously and begins playing the game with a real gun. Not only did this film single handily kick start me and my friends' love for dart guns and sneaking around our dark houses during the summer, but it remains one of those unheralded gems from the 80's that is ripe for discovery. Why isn't this thing programmed for cult film festivals? I could see Harry Knowles championing this thing. 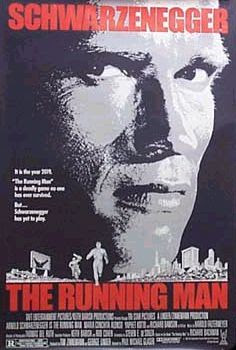 3. The Running Man- Another great 80's cult favorite with every one's favorite governor portraying a convict running for his life in an elaborately staged game show hosted by Richard Dawson in the year 2019! Too good to believe, I know. For those totally clueless about this, "The Running Man" was Tri Star's attempt to cash in on everything from WWF (since Jesse The Body Ventura has a role) to "American Gladiators"... yes the original show with bad ass guns that shoot tennis balls at 80 MPH. As a twelve year old kid, this thing rocked. I caught up with it a few years ago and, amazingly, it still holds up. Great one-liners from Arnold, a smoking hot Maria Conchita Alonso and some pretty great production designs. 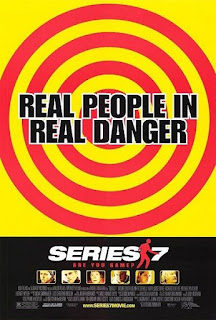 4. Series 7: The Contenders-The weakest of this bunch, but still a solid and intriguing modern spin on the death game genre. Directed by Daniel Minahan, the film jumped on the early 00's bandwagon of the mockumentary and re-created his love for films like "Tag the Assassination Game" as a film crew follows 6 people chosen to take part in a contest of last man standing. Really more of a jagged, sardonic riff on the explosion of modern reality television, the film's bite comes in the character of Dawn (Brooke Smith, the girl held captive in the well in "Silence of the Lambs"), a pregnant contestant who goes all out. As far as dark comedies go, you can't ask for anything better than this, even if the characterizations are a bit lazy and the film runs out of steam well before its over. 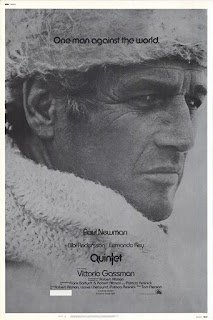 5. Quintet- As mentioned above, "Quintet" isn't the debacle that many have claimed. The sets are cheesy, yes, but Newman is effective as a man struggling to understand the futuristic game he stumbles across in an ice-covered city full of ravaging dogs and homeless wanderers. Not quite a dystopian vision of the future, but a compelling one nonetheless. And, honestly is this film the genesis for the genre? For the life of me I can't think of any films before this late 70's film that deals with this subject matter. That alone should secure "Quintet" a firm place on any such list.
Posted by Joe Baker

How do people keep getting to see TAG? I want to see TAG so badly. SadBlogger.

I would add The Dead Pool to my list even if it doesn't quite fit in with the list criteria. It's worth watching if only for Jim Carrey's small role at the beginning of the film (I don't want to ruin anything for you).
Great list idea.

Cool idea for a list. No argument on No. 1, it's the king. I remember watching the trailer over and over when it first appeared online and the movie didn't let me down.

The Running Man -- another good choice. Containing one of my favorite one-liners ever: "Sorry, I don't do requests!"

A guilty pleasure I would add is the Gary Busey-Ice T classic "Surviving the Game."

I mention it whenever I can.

The address didn't come out.

My TAG championing is here

Since my parents were subscribers #125 to HBO and Showtime back in the early 80's (no kidding!) this thing received some pretty heavy rotation back then. I think my dad even has an old VHS copy somewhere. And yes, great call on "The Dead Pool". I forgot about that one.

Adam, I can't recall seeing "Surviving the Game". Thanks for the recommendation.

Moviezzz, thanks for the link again! I remember reading that entry.

Nice to see the inclusion of Series 7.

What's that terrible movie with Ice T and Gary Busey where they chase him through the woods?

A brand new prison building is opening on Monday morning. That give Ice T the chance to bring in a huge group of killers he knows over and have them off one another for a monetary prize.

If that doesn't do it for you, hold on, because I forgot to tell you Ice T's co-star. Christopher Lambert.

"Mean Guns" sounds tantalizingly bad (in a good way). I just added that and "Surviving the Game" to my queue! I'm so behind on the B movie death game genre....