I can count the number of glacial-set police thrillers on one hand. There's Erik Skjoldbjaerg's Norwegian "Insomnia" and that film's own American remake starring Al Pacino and Robin Williams which relocates its main setting to Nightmute, Alaska... and is a pretty under appreciated Christopher Nolan project. Both films pit a slowly unraveling police investigator against his own conscience and daylight itself, respectively. If I'm leaving off any well crafted films from this sub-genre, please let me know. 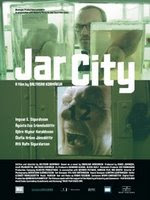 Now along comes Baltasar Kormakur's "Jar City", a film that revels in the same exotic setting and spares no police procedural details. When a body of a man is found murdered, Inspector Erlunder (Ingvar Sigurossen) and his colleagues mobilize to find the killer. What they dig up (besides the eyes of Iceland's apparent favorite food dish, sheep's head) is a long tract of police corruption, dark family secrets and seething hatred. In essence, "Jar City" is not far removed from the Hollywood film noirs- or at least the ones that attempt to pin down the seedy underbelly of Los Angeles such as "L.A. Confidential" or "The Black Dahlia"- which is not a good film yet it acutely embellishes James Ellroy's sickening and corrupted slant on the city of angels. With every step of "Jar City", the screws are tightened and we begin to not want the film to go any further. And when it does reach its climax, the non-linear story lines gel in a brutally resonant way.

Mirror ideas abound. While searching for the killer, Erlunder is dealing with the drug addiction of his own daughter. Another character loses his young daughter in the opening of the film. While the murder and violent themes- including a missing brain and a really, really scary, large, bald headed escape con- are presented in straight forward images, the beautiful landscape setting around Iceland's capital, Reykjavic, is sublime and starkly contrasts everything else. "Jar City" almost supposes the idea that violence never happens here, but when it does, its repercussions are felt throughout the country. Likewise, its seemingly random (and singular) murder surfaces generations of hatred, guilt and genetic disease. It's a very interesting idea, executed with style and depth. Check this one out.
Posted by Joe Baker