When the Bad Men Came to Town: Alain Cavalier's "Pillaged"

The French sure had a way of regurgitating film. Taking the stellar heist films of the 50's such as John Huston's "The Asphalt Jungle" and Jules Dassin's "Riffifi" and metastasizing them into a lurid sub-genre all their own, there lies so many hidden gems (and outright classics of their own) in the decades to come. From Jean Pierre Melville's ice-cold treatises on betrayal and meticulous technique to the bruised energies of the many Alain Delon titles, there's always a surprise to be had. 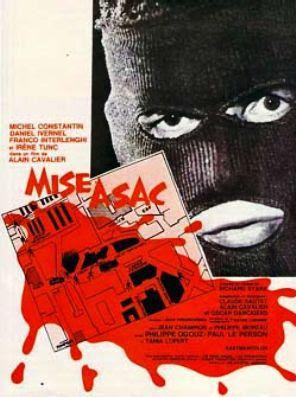 Alain Cavalier's "Pillaged" (1967) is one of them. If there weren't twenty more years of such films coming down the pipeline, I'd wager that "Pillaged" was a capsized attempt to wave down all the other entries. The very plot- about a group of men taking hostage an entire town over the course of one long night in order to rob all its cash dispensaries- seems like the stuff of graphic novels. It plays bold, fast, and tense and it deserves a wider audience (are you listening Shout Factory! or Code Red???)

Released in 1967, the film stars a who's who of French character actors (Michel Constantin, Daniel Ivernel, Phillipe Moreau and Irene Tunc) as a motley group of safe crackers, stick-up men and underworld roustabouts tossed together for the sole purpose of surveying a gorge-village town and robbing the bank, the local steel mill cash holdings and anything else that crosses their paths. Each man has a distinct job and within 20 minutes, "Pillaged" is knee deep in the overnight heist, carefully establishing its plan and then observing as most things go like clockwork. Of course, being a French film noir, something unexpected crops up and the job goes incrementally wrong before the sun rises.

Filmed by workmanlike director Alain Cavalier (and only his third film after the aforementioned Delon vehicle "The Unvanquished" and his startling debut "Le Combat dans I'il") "Pillaged" doesn't ascribe many sympathies to its robbers.... and with the exception of a Stockholm-syndrome induced female abductee, very few other personalities are brought to the forefront. This is a film that excels in examining the steps of a crime. It's hugely believable (at least in the mid 60's when all it took to kill any communication was a snip of the wire) and executed with keen skill and style.

Labels: film noir, Not On DVD