On "Lonely Are the Brave" 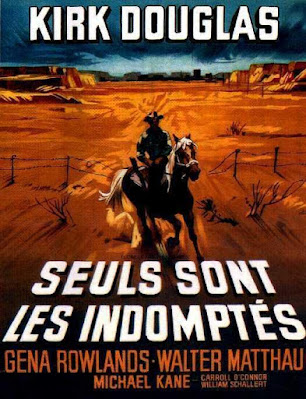 In David Miller's "Lonely Are the Brave", the wild west isn't in conflict with the modern world. It's already past... a distant, dusty memory as technological advances and "civilization" has already encroached on its manifest destiny boundaries. Cowboy Jack Burns (Kirk Douglas) is the one who refuses to relent. He's still playing a cowboy while- in the opening few minutes and a furtive harbinger for the finale- his horse tentatively makes it across a busy highway to arrive at his destination where he can kick off his chaps and settle into the role of maverick savior for his old friend Jerry (a wonderfully complex Gena Rowlands). And while he agrees to help spring her husband (and his mutual friend) from a local jail cell, "Lonely Are the Brave" never forgets it's dichotomy of something stuck in the past century. One side uses a horse, while the other uses helicopters and off road vehicles. The dye is set early on, but Douglas and filmmaker Miller do a fabulous job of drawing out the tension in mutating a simple idea into a lethargic lament.

As Jack, Douglas is all gristle and clenched jaw. He accepts the challenge of helping his friend with the gusto of an outlaw, first picking a (hilariously staged) fight with a one-armed drunkard in a saloon, then acting like the pied-piper savior for a cell full of locked up guys. Even that scenario goes sideways, further deflating the mythic qualities of the wild west anti-hero riding in and saving the day. From there, the second half of the film is a glorious cat and mouse chase in the mountains as the sheriff (Walter Matthau) tries to locate the escaped convict. As Dalton Trumbo's precise script belies, neither man seems to be taking the game very seriously, even as gunfire is exchanged and freedom (or failure) is just mere inches away.

Released in 1962, "Lonely Are the Brave" can, I suppose, be called a western. Like John Huston's equally brilliant "The Misfits" just a year earlier, both films represent a moment in time when the landscape was truly shifting beneath the feet of so many cultures. Some embraced the change with open arms while others remained fixated in the roots of their past, no matter how abruptly the winds were blowing. Both Matthau as the law and Douglas as the "outlaw" completely believe their outlook is correct. Even in the film's final, mournful moments, both men nod supremely that they're right. Honestly, it's hard to deny their worldview. "Lonely Are the Brave" posits that both can exist at the same time.