Hazy Days: Les Blank's "A Poem Is a Naked Person"

I can only imagine the reaction if Les Blank's "A Poem Is a Naked Person" had actually been unleashed on the movie-going public when it was finished in 1974. Following alt-rocker Leon Russell around for a three year period in the boondocks of Oklahoma during various recording sessions three years prior, documentary filmmaker Les Blank's film is a meandering portrait of backwoods culture and hazy rock and roll lifestyles that feels like the anthropological template for the films of Robert Minerva and even Harmony Korine decades later. 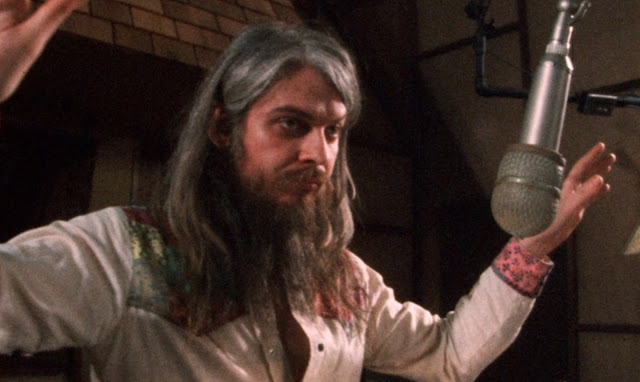 Rarely shown outside of personal events for more than 40 years, "A Poem Is a Naked Person" only saw the real light of day in 2015-2016 after Blank's death, when it was remastered and released through Criterion.... with the support of Blank's son and especially Russell himself. What emerges in this crusty document of early 70's rhetoric is a blast. Darting from a wedding of a band member in Russell's very Southern gothic mansion to interviews with a very entertaining man who eats glass at an Oklahoma air show, "A Poem Is a Naked Person" is just as weirdly poetic as its title suggest. One does get a ton of Russell's earthy alt-country/rock music (and even more cameos from friends as diverse as Eric Anderson, JJ Cale and Willie Nelson), but the intention of the documentary is to replicate a time and place not through aggrandizement, but a down-and-dirty synthesis of creative artistry and all the weird freedom that brings with it.

All of that freedom (and glass eating) aside, "A Poem Is a Naked Person" fills a documentary gap that had been brewing for some time. Even though the grandfathers of the genre, such as Frederick Wiseman, D.A. Pennebaker and Haskell Wexler, were playing hard and fast with the rules of the form, what Blank ultimately creates with his effort is an explosive step forward. Yes, in a sense this is a musical documentary, but one that continually side-steps the music for a loose interpretation of whatever else caught his (or Russell's rag tag fellow musicians) eye. In the basic sense of the word, unless one is crafting a History channel documentary meant to educate a classroom, isn't that what the truest documentaries are supposed to do? In the case of Blank's film, he not only captures some musical momentum, but also the wild, unpredicatble and hazy world around that momentum.

Just found your site ~ you are adorable and loaded with information. Thank You for the smiles and learning. Facebook bellen

I read your Blog is very useful Thanks For this I will tell you this
The Omicron variant likely will spread more easily than the original SARS-CoV-2 virus and how easily Omicron spreads compared to Delta remains unknown.
I have perused different web journals that are posted here and they are altogether worth a read. Omicron Virus Variant