A science fiction invasion film as seen through the (mostly) serene eyes of Kiyoshi Kurosawa, "Before We Vanish" brews at the same temperature as most of the auteur's previous work- that being part somnambulist before raging a bit brighter towards, in this case, ultimate apocalypse. Like Koji Yakusho in "Cure" (1997) or any one of the wide-eyed victims in his masterpiece "Pulse" (2001), the characters that populate "Before We Vanish" take some decoding before coming into sharp focus. But when they do, the film moves ahead with an entropic force that's hard to deny.

Opening on a mass murder as teenager Akira (Yuri Tsunematsu) stands over the bloody mess with pacified fascination, the echoes to "Cure" speak volumes. But before we get the chance to understand what this violent opening means, her story line is soon replaced by worrisome Narumi (Masami Nagasawa) as she cares for her husband, Shinji (Ryuhei Matsuda) whose mysterious sickness seems to be a neurotic imbalance that causes him to flop around and seemingly have to learn to walk again. Enter marooned news reporter Sakurai (Hiroki Hasegawa) snooping around the opening Akira murder story when he's approached by blank faced Suzuki (Ken Mitsuishi). It's here we finally get some explanation when Suzuki tells the report he's one of 3 aliens walking Earth, stealing "concepts" and ideas from humans in advance of an alien invasion. Sakuria begrudgingly agrees to be his 'guide' and chauffeur the stranger to various destinations looking for the other two body snatchers.

"Before We Vanish" certainly plays with lofty ideas. In the various scenes where the aliens come into contact with other humans, they engage in conversation (or create their own confrontations as Shinji does with one homeowner) forcing the human to focus on an idea (i.e. possessions, labor and the most complex of them all love) before stealing them away with a touch to their forehead like an innocent E.T. The only problem- the concept is then completely lost on the human being, leaving them a floundering soul in a world devoid of their understanding. Naturally, this begins a mysterious pandemic that sees the Health Ministry and the armed forces mobilizing to solve the unknown problem. 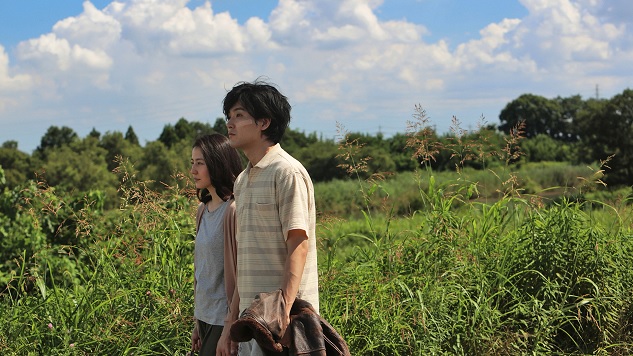 Suzuki does eventually meet Shinji and Akira, and the film devolves into more of an action parody with sub machine guns and rudimentary technological gadgets needed to communicate to the heavens than anything else as the trio struggle to complete their "mission". But before that (and as with all Kurosawa films) there's an attention to mood and style that's unmistakable. The film is at its best when its dealing with the tug and pull love between Shinji and wife Narumi. She wants to believe her husband is suffering from some sort of amnesia, but is finally forced to realize he really might be an idea-sucking extra terrestrial. And the way their relationship plays out to the very end is heartbreaking and complex, especially in her last request that may have saved the world after all.

There are some faults with "Before We Vanish", such as Kurosawa's forced world building of pandemonium breaking out across the city. Something tells me, for once, a tight focus (and perhaps a minuscule budget) prevented the filmmaker from truly expanding his canvas of panic and public menace outside of a single hospital scene.

Still, as a society who've just begin to marginally emerge from a worldwide pandemic, the unknown creeping horror presented in "Before We Vanish", and so many other terrific Kurosawa films does strike a deep chord of recognition. Released in 2017 but never proceeding further than the festival circuit, "Before We Vanish" may strike one as unnerving, but its central idea of someone losing their very sense of self to an inexplicable force is even scarier.As one alien explains to Sakurai, Earth probably would not have lasted another 100 years anyway. At times today, with the morass of greed, selfishness and in-fighting plaguing us all, perhaps now is as good a time as ever for an invading alien force.

Just found your site ~ you are adorable and loaded with information. Thank You for the smiles and learning. Facebook bellen