Even though it resides in a loopy science fiction template that features ghost ships, nerve-jangling space walks and knife fights inside a cockpit, James Gray's "Ad Astra" is a lot closer to his morose studies of male psychosis and obsessive choices than it first appears. In fact, it makes for a nice double feature with his previous masterpiece "The Lost City of Z" in which pioneers of terrain and courage venture farther out into the unknown than anyone before them. In "Ad Astra", that explorer is astronaut Brad Pitt, chosen to travel to Mars (a planet that houses the last stable outpost of humanity in near future of colonization) in order to hopefully coax his lost father (also an astronaut) to stop sending chaotic micro bursts of energy from a failed mission decades ago. I know, it does preposterous when explained, but Gray manages to create a moody and introspective work of art that challenges science fiction conventions in its quiet remorselessness.

In between the bursts of action- probably maintained to keep the interest of those audience goers enticed into the theater looking for the spectacle of a big budget Star Trek- "Ad Astra" is especially intense in its introspection. From the voice-overs of Pitt that question everything from his masculinity to his accepted mission, "Ad Astra" lives in the margins of second guessing. It's also a film that lingers on choices. The sadness of watching a nonfunctioning life vessel slowly melt away into space or the vastness of black that engulfs a floating figure moment later are given much more prominence than other films that deal with characters in space. 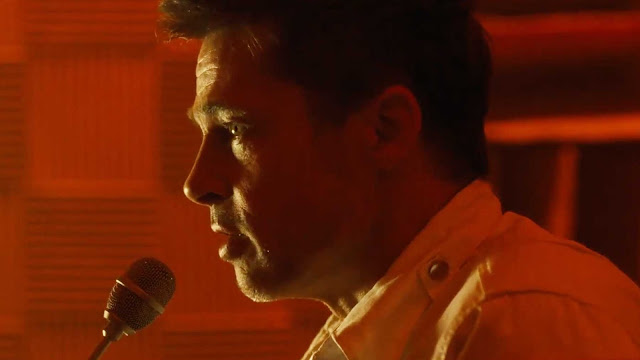 Director Gray has been creating impressionistic films for more than two decades now and while "Ad Astra" is certainly his most adventurous trip to (inner) space, it's also a complimentary work that falls into his glorious landscape of psychological exploration.
Posted by Joe Baker