Out of the Past: On "Union Station"

One of my favorite chase scenes in all of cinema resides in William Friedkin's "The French Connection" (1971). No, it's not the very muscular and chaotically choreographed car chase under the subway system, but a game of cat-and-mouse-hide-and-seek that pits Popeye Doyle (Gene Hackman) and his fleet-footed attempt in keeping up with his target (Fernando Rey) on the hectic streets and (eventual) busy New York subway system. It's a masterclass set-piece of editing and sound that strikes at the heart of two people trying to out duel each other.

So imagine how crestfallen I was- and alternatively thrilled- while watching Rudolph Mate's "Union Station" (1950) a few months ago when the same type of criminal versus cop chess appeared in this aces crime thriller. I may need to go back and see if Friedkin lip services Mate's film in any way, but "The French Connection" is undeniably indebted to "Union Station's" crisp, boldly edited chase scene that features a cop following a suspected criminal around and about, ending up on a subway car where the tables are suddenly turned. 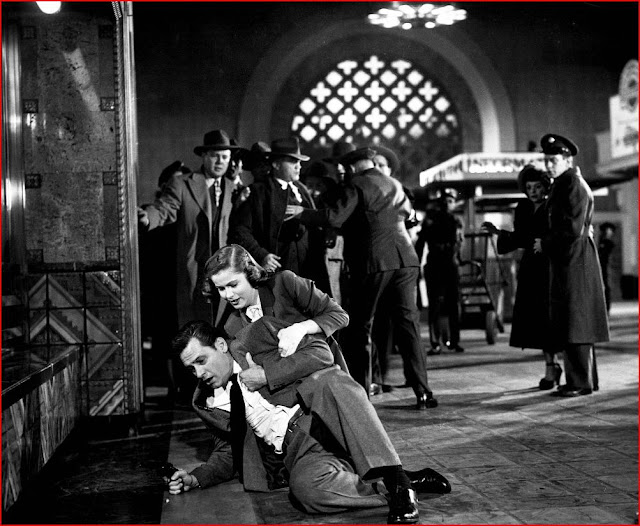 In fact, pretty much all of Mate's masterpiece is a brilliant study of bodies in motion and the logistics of men standing, watching, waiting.... something that's been the machismo hallmark of current directors such as Michael Mann and Johnny To for decades now. One of those men standing and watching is William Holden, the cop of the film's train station title who's drawn into a web of tension when a group of kidnapping suspects use his train terminal to do their extortion and bidding. Partnering with the New York police, Holden initially helps them identify the criminals (with the help of beautiful Nancy Olsen), and from that point on, "Union Station" realizes several sequences of paranoid stake-outs, double crosses and electric action scenes that sets the film apart from the rudimentary film noir efforts the film is often associated with. Coming at the beginning of the 50's when noir was beginning to metastasize in other things (i.e. the hard boiled cynicism of Robert Aldrich and Cold War metaphors), "Union Station" is so thrilling for its simplicity and its attention to form. None of this is surprising since the director, Mate, came from the ranks of celebrated Hollywood cinematographers (and had already helmed two highly regarded noir classics "D.O.A." in 1949 and "The Dark Past" in 1948). What is surprising, however, is that "Union Station" is a largely forgotten relic of the noir wave that deserves its place in the pantheon of hard boiled cinema.
Posted by Joe Baker