As stated on this blog before, almost all of filmmaker Christian Petzold's films are about people and places in literal flux. I don't think he's ever broached the subject quite as literally (in title or theme) as he so assuredly does in his latest feature, "Transit". Not only is his lead character Georg (Franz Rogowski) stuck in an amalgam of time that fuses the pervasive fear of German Nationalism encroaching across Europe in the 1940's with today's climate of fear mongering intolerance about immigration, but the people embodying this terrifying space of inquietude are locked in limbo as well, unable to advance one way or the other. Even with the papers of a dead man emboldening his trek across Europe in the hopes of gaining passage to somewhere safer, Georg is a haunting figure in a long hall of mirrors where everyone is seen over and over with the same hopes of salvation. It's a daring and formal enterprise, made all the more searing by Petzold's usual clean aesthetic that refuses to advance the narrative into anything resembling a happy ending. 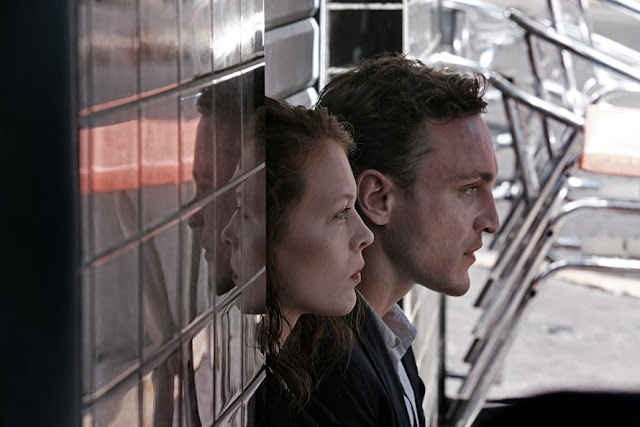 In it's brisk but packed 100 minute running time, "Transit" gets right to the punch early, unspooling so much information in its first third that it feels like Petzold's most complicated film yet. The aforementioned Georg meets a friend in a bar who asks him to deliver a message to a quasi famous writer stashed away in a local hotel. Dropping us into a Europe where forces of police-attired military units are sweeping across the landscape and rounding up anyone without the proper ID papers, George accepts for the little money offered. Realizing the writer is dead upon arrival, Georg swipes his manuscript and ID and submerges himself to Marseille in hopes of contacting the writer's wife Marie (Paula Beer) and securing transport papers in a town where the oppressive government haven't quite reached yet. Through an unidentified narrator (at least until the final few minutes) and Georg's own improvised persona, "Transit" becomes both a mystery and a political thriller in how it dispenses (and withholds) crucial information until its ready to burst.

Finding the elusive Marie, however, soon becomes a secondary concern to simple survival for Georg. Actually, Marie finds him, running into him on the street several times as she mistakes him from behind thinking he's someone else. This motif of confused identity and amnesiac scope becomes one of the many telling hints of bureaucratic malaise and mask-wearing Petzold chooses to wash across the film.

Adapted from a novel by Anna Seghers, "Transit" is a masterwork adapted (and updated) by Petzold from its original intentions of Seghers World War II experiences into the sleek and metropolitan anti-thriller in which the vehicles, dress and locale are today juxtaposed with the occupational fears of yesteryear- although some would argue the occupying forces are stronger and more insidious than ever. And, like Petzold's previous film "Phoenix", he gets to play with the notions of a society simultaneously crumbling and rebuilding at the same time, leaving the inhabitants to pick up the personal pieces in its wake. And like "Phoenix", Petzold fashions a final scene so ripe with meaning and so crushing in emotional complexity, it only further solidifies the fact that he's one of the two or three best filmmakers in the world today.