Released in 2007, "Yella" was the first real Petzold film to see a larger than limited release both here and in the U.K. And by that I mean outside of film festivals and into the elitist paying public of the 300 or so "art-house" theaters around the country. Again starring muse Nina Hoss, "Yella" is a frigid, tempered effort that begins with a woman being stalked by her ex husband and ends just as morosely. In fact, the title of Petzold's previous film, "Ghosts", is probably the more apt title here as Yella and her co-stars are moribund in some sort of steel and glass purgatory... a world where everyone's hotel room doors are inexplicably left ajar for anyone else to walk inside and the antiseptic offices where many of the inhabitants square off are sealed from the exterior sights, sounds and smells. It's an extremely interior and hermetic film, both physically and emotionally. See, Yella (Hoss) narrowly escapes the suicide attempt by this unhinged ex-husband when he drives his car off the road with her in it. Landing in water, Yella awakens on the water's edge and stalks off, seemingly unfazed, towards the new job awaiting her in a nearby town. Once that opportunity crumbles, new connections are made with Phillipp (Devid Striesow) and Yella's whip smart attributes to quickly size up accounting balance sheets comes in extremely handy for him, who happens to make his living bailing out fiscally unwise companies and turning their assets to his benefit. But all is not as it seems as Yella's ex-husband (also unconscious next to her when she awoke on dry land) begins to appear and disappear in her new life and odd sounds randomly pierce her fragile state. 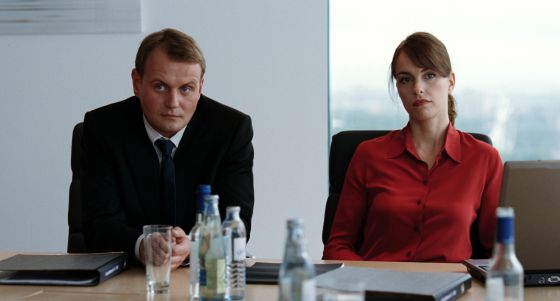 "Yella" plays by its own dream logic for good reason. Why does she never remove the same red shirt and gray dress for the duration of the film? Why does no one seem to notice her immobile fits when she breaks a glass on the desk next to her? How does her ghostly ex suddenly appear next to her one moment when he seemingly wandered right past her the second before? Again fixated by economic mobility or the lack thereof, "Yella" is a tight yet unsettling psychological drama that bears all of Petzold's thematic stamps, especially his fascination with a loner couple awash in the German countryside that links the larger cities. But the real synonymous factor is the wide-eyed, graceful performance of Nina Hoss who feels as if she's just hitting her stride under Petzold's dour, nihilistic moods. And as the film winds to its somewhat expected but still striking finale, that mood prevails. And Petzold's vision doesn't even allow his characters to dream good thoughts.

Just as Petzold's vision on-screen became more confident and tantalizing, for the first time in his career, these visions were given confidence by numerous eyes around the globe as well. His next film, "Jerichow" (2008) even got a proper art-house release and did favorably well financially and even better critically. Loosely echoing the film noir classic "The Postman Always Rings Twice", Petzold dispenses with the potboiler atmosphere of the original, which is something the 1981 remake starring Jack Nicholson and Jessica Lange dramatically amps up, creating a a wild and sweat-filled lust-noir that verges on camp. But in "Jerichow", everything is sedate and highly plausible. Even as the wife (Hoss) and her new workmate/lover Thomas (Benno Furmann again) engage in secret dalliances behind the back of her husband and his boss Ali (Hilmi Sozer), the canvas of blame is democratic. And, yet, when the duo plot to kill the husband, Petzold has built up such a shifting allegiance of paranoia and dead-end decisions that we almost don't blame the couple for conspiring to commit murder. Further still, the revelations in the final moments from Ali complete a triangle of casual acceptance that again shifts our preconceptions about the film noir genre itself and push "Jerichow" into a human drama more than a token genre name. 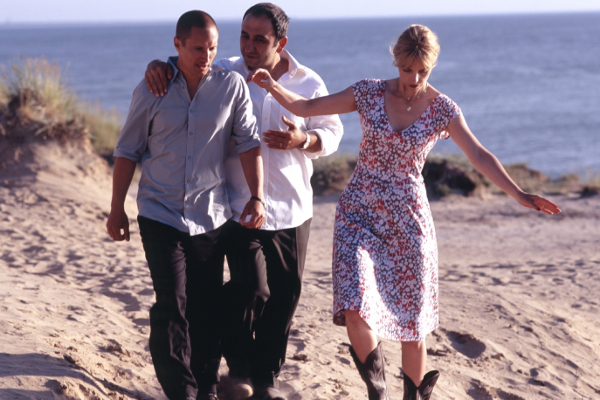 Reflecting back on it now, and having watched it again in the last few months after my initial theatrical viewing seven years ago, "Jerichow" strikes me as the summation of Petzold's evolving work. It's a film that, like the worn out cowboy boots that Nina Hoss dons beneath her lilting flowery dresses, consistently upends our expectations and presupposes there are invisible boundaries between 'good' and 'bad'. In "Jerichow", everyone is a shade of both these identifiers and their actions against each other are organic reactions to their situations. It's a marvelous tightrope walk of a film.

After a short stint in TV work again (which will be covered in the third and final installment here), it was four years before Petzold would grace the big screen again. Released in the fall of 2012 after a hearty film festival circuit tour, "Barbara" continues Petzold's fascination with stasis. Again placing Nina Hoss at the center of the drama, she plays a Berlin doctor ostracized to the East German country after an unknown incident with the authorities. Living out her days in solitude and looking forward only to the clandestine meetings with her West German lover (who promises to help her defect), Barbara slowly finds her self worth in this rural community. But at a cost. Continually monitored by German authority figure Klaus (Rainer Bock) and completely unsure of the genuineness exuded by fellow doctor Andre (Ronald Zehrfeld), Hoss gives her best performance to date for Petzold. Virtually holding her breath in many scenes, unwilling to compromise her inner thoughts or show weakness to a society virtually holding her hostage, she gives the film a powerfully mute force with her eyes and constricted body movement. If there were justice, she would have gotten an Oscar nomination that year. 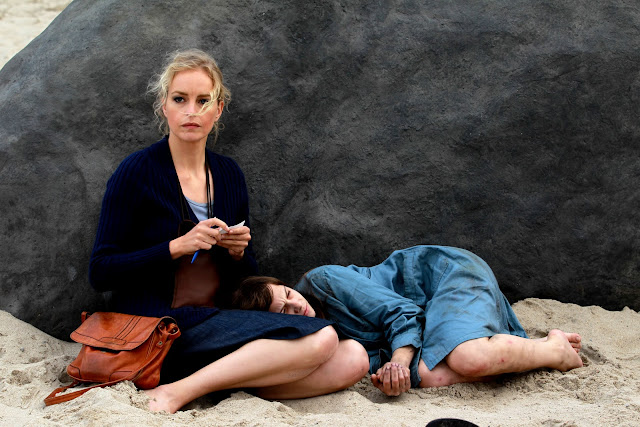 The first film by Petzold to reflect openly on a specific time in Germany's past, "Barbara" feels like a razor sharp exploration of this paranoia and self delusion. In one particular scene, Barbara is waiting in the hotel room for her lover to finish his business meeting downstairs when, from the adjoining room, a young and beautiful girl sneaks into her room and they begin talking. She is the girlfriend of Barbara's lover's partner. The young girl talks about the budding relationship between them and tells Barbara he's going to help her leave. They peruse a magazine full of wedding rings and like little girls, each pick one out and try on the paper fitting. When the young girl asks Barbara "is it hard?", referring to the process of defecting to West Germany, Barbara's cold stare tells her (and us) everything about the daydreamed atmosphere they exist within. It's no surprise that later in the film, Barbara makes a particularly stunning self-sacrifice. This act of unerring kindness and fatalistic settlement back into her rural purgatory (there's that idea again) carry on Petzold's bittersweet outlook on life and its reflection in cinema.