It just wouldn't be an Abel Ferrara film without some type of controversy. Whether it's the use of an unlicensed Schooly D track ("The King of New York") or the absolute failure to find stateside distribution for his latest work (any of the last half dozen films, basically), Ferrara has settled into the role of a maverick pariah, still as prolific and challenging as ever, but unable to share his unflinching views with a wide audience. However, with "Welcome To New York"- his rendering of the rape charge incident against powerful French bank manager Dominique Strauss Kahn in 2011- Ferrara faced a new obstacle. After being dumped in very limited release earlier this year and surreptitiously released on VOD, Ferrara came out blasting his production company for re-editing the film and tampering with his artistic vision. Having not seen that slimmed down 107 minute version and only reading about the changes through various online sources, it does sound as if some of the story's perspective has been altered. Ferarra has been relentless in his distancing of that version and his motto that the best way to view his films is through nefarious online downloads never felt quite so relevatory. Yet all that rhetoric aside, "Welcome To New York" is not only a slimy, misogynistic character study of a man unable to distinguish between the barriers of decent behavior, but it's one of Ferrara's absolute best works yet and one of the most damning films of the year. 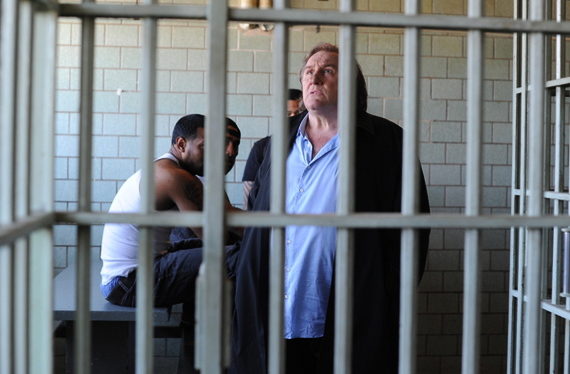 Having immersed himself in this flesh-filled wasteland for the past twelve hours or so, its not surprising that Devereaux crosses a thin line when, the next morning, he emerges from the shower and sees a hotel maid (Pamela Afesi) standing in front of him. We've seen her enter the room and call out "housekeeping" several times with no response. Devereaux approaches, emits more guttural sounds and forces himself on the maid, who manages to fight him off and escape. It's an incredibly sad and disturbing scene for several reasons. Is Ferrara excusing the real life Strauss-Kahn as an unwitting symptom of his excessive environment? Does it simply proliferate Ferrara's well documented sense of male dominance within his films? After all, this is a fictional re-imagination of a real life incident (that was eventually dismissed in court), so how close to the truth does it cut? All of that seems secondary to the main theme of the film which is power corrupts completely. Rest assured, there's no catharsis for Devereaux or release for the audience.

From there, "Welcome To New York" deals with the arrest, court proceedings and house confinement of Devereaux and narrows its focus on the relationship between him and ex-wife Simone (Jacqueline Bissett). Resembling the jagged verbal sparring between James Russo and Madonna in Ferrara's 1993 masterpiece "Dangerous Game", "Welcome to New York" likewise examines the rancid foundation of Devereaux and Simone as they drudge up past indiscretions and their overall lack of faith. Even though he can be accused of extreme misogyny, Ferrara always manages to puncture the tug of war between the sexes with sharp fangs.

While it does have its share of miscalculations, such as an opening self reflexive moment that doesn't quite work, "Welcome To New York" remains an unrepentant look at a deeply flawed individual whose beating heart is as black as the night. This is comfortable territory for Ferrara and even in the final moments, when Devereaux should be thankful for his acquittal, his flirtatious personality emerges again. A leopard can't change its stripes, and a sex-addicted man with the money and means to avoid any penalty surely won't become a saint anytime soon.