On "Trainwreck": And Why It's One of the Year's Worst

Fully aware that I'm sounding like the old man yelling at the kids playing in the street to "keep it down" at 3pm in the afternoon, I have to ask just where and when the American comedy went so..... wrong. Was it in the 1990's with the advent of "Saturday Night Live" inspired skits metastasized into hopelessly realized feature length form, completely haphazard of a script and relying on the improvisational zest of its comedian-turned-actors in their starring roles to carry the entire effort? Do we simply blame society-at-large.... where the over saturation of images, news, reality TV show adornment and celebrity worship have created a vacuum of tastefulness and wit? Or do we lay it at the feet of Judd Apatow himself, the crowned king of modern comedy, whose films continue to grasp both the financial and critical respect which so importantly provides future freedoms and opportunities? Regardless of who or what we blame, "Trainwreck" is yet another coffin in the nail of movie comedy, devoid of any real heart, depth or resonant enjoyment. That's its won the hearts and minds of so many discerning critics makes it an even more troubling current event. 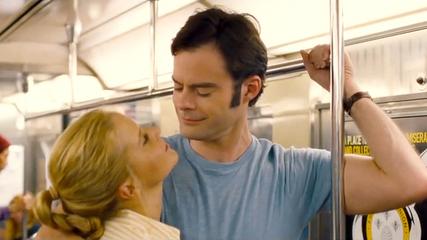 Written by comic Amy Schumer, "Trainwreck"deals with her overcoming her relationship hang-ups when she meets good doctor Aaron (Bill Hader). Seemingly stunted by the morose ramblings of her father (Colin Quinn) at a young age, Amy inverts the role typically held for the "guy" in the film... which means she's sexually adventurous, drunken, and unable to emotionally connect (or even spend the night) after her many conquests. After she's pinned by her magazine editor (Tilda Swinton) to complete an article on hot-shot sports doctor Hader, she finds herself attracted and even falling in love with the man, even though every fiber in her body wants to react differently.

Several reasons for my disdain of "Trainwreck". Allow me to begin. The great critic Roger Ebert once said that even though he loves all movies, the films he loves the most are the ones about good people. While "Trainwreck" does go through the usual rom-com notions and arrives at a happy ending, I didn't like Amy Schumer one bit. Part disaffected valley-girl with a stream of bitter, nihilistic sense of humor coursing through her veins, she struck me as an especially nasty person who probably deserved her fate of one-night stands and frigid emotional connectivity. This persona of "new wave bitch girl" deviates straight from her stand up routine, of course, which makes "Trainwreck" even more of a laborious extension of the shallow foundations modern comedy movies exist upon nowadays. I suppose all we're missing is the movie version of Gallagher smashing watermelons.

Secondly, I've become less and less imbued with Judd Apatow films. After his 2007 film, "Knocked Up" (which incidentally remains one of my very favorite films from that year), the leash has grown longer and longer for him. His films run to gargantuan lengths for comedies and the humor feels improvised and stretched out like a mini-reel of best gags from that particular day. Gone are the laughs derived from story arch, character set-up or general reactions. Now (and not just with Apatow), but comedies are an excuse for a group of ten or twenty friends to get together, hang out on a movie set all day, get high and throw whatever joke seems to stick against the celluloid wall. There's no ingenuity, no wit in the humor anymore. The scene that got the biggest laugh in "Trainwreck" at my particular showing was Amy Schumer talking to her happily married sister Brie Larson (a terrific actress who looked bored with simply being there to react against Schumer's seemingly 'improv' hysterics opposite her) describing a tampon. Long, drawn-out, gross humor that feels more at home in her comedy stand up routine than a full fledged movie. Every scene like this stopped the film dead in its tracks and had me wondering where subtlety went. Did the Ben Stiller 'hair gel" scene permanently push us over the comedy precipice?

Lastly, outside the 'improv' framework, the other dead air moments in "Trainwreck" involved the endless tracks of cameo stars. After reading several good raves about the "scene stealing" appearance of superstar Lebron James in the film as Hader's best friend, I was expecting something special, but instead got leaden line deliveries and the usual amateur star athlete vibes from his "performance". He's cheap and wants to split the bill. Funny. He acts like the soupy best girl friend in other rom-coms. Inspired. After the cheap, mean spirited racial humor of Amy's father (Colin Quinn) in other scenes, I'm surprised James wanted anything to do with the film. Although he probably had no idea those lines even existed since the script was most likely 11 pages long with 170 pages of "improv" scribbled in the margins. Further yet, we get scenes with Matthew Broderick, Amarie Stoudemire, Tony Romo and even Marv Albert who gets to talk in third person as if he's narrating one of his basketball games. I can't begin to tell you how superfluous, self congratulatory and pointless this scene felt in a film full of incongruous intentions.

Perhaps all of this is my problem. Maybe comedy just isn't my bag anymore. Looking over the shelves of DVD's I own and perusing my "best of the year" lists since 2000, I count approximately a dozen or so. Half of those are Wes Anderson films, who maintains his own detractors and whose sensibility in comedy is about as alien as one gets from the Apatwo brand. Still, I have funny bones somewhere inside me. I know every comedy can't be "Dr. Strangelove", but I at least wish they tried to reach some peaks beyond dick and fart jokes. Or in the case of Amy Schumer, gay and tampon jokes.
Posted by Joe Baker

Lovely review. You know I think you're on to something. I too am not a fan of the Judd Apatow-style comedy. Nothing against Judd or Amy. I'm just a little tired of the tampon/poop humor as you indicated. I much prefer Melissa McCarthy. I heard 'Spy' was fantastic.