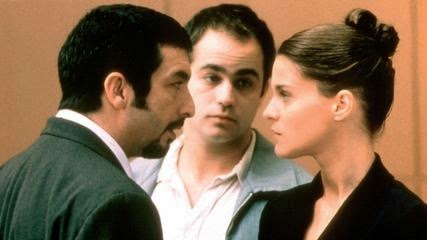 5. Nine Queens (2000)- The loss of Argentinian writer/director Fabian Bielinsky in 2006 was a massive loss to international film making. If one hasn't seen his 2005 "The Aura", then you're missing a flat out masterpiece. But his calling card to larger acclaim came five years earlier with this film, "Nine Queens", about the hustle and bustle of two men (one of whom is the terrific Ricardo Darin) attempting to pull off a massive con involving a rare set of stamps. Bielinsky understands the tension of the con lies in good characterizations... men and women who inhabit the full spectrum of good and bad and everyone in "Nine Queens" deserves a varying degree of observation. Infused with a kinetic Tarantino-esque inertia and a script that flies by with pure adrenaline, this is one film to seek out. 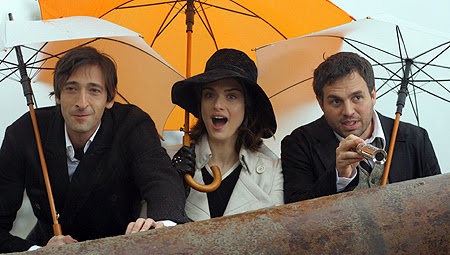 Starring Mark Ruffalo and Adrien Brody as grifting brothers who choose the eccentric but wealthy mark played by Rachel Weisz, "The Brothers Bloom" establishes itself right away as another entry in the cinema of "New Cool" as I call it. Director Wes Anderson being the godfather of this movement, of course, Johnson employs some of the same stylish techniques (whip pans, cutesy acoustic music, vibrant color schemes) but creates characters and a story that feel all their own. Perhaps too whimsical for some, I absolutely loved the way Johnson films Brody and Weisz falling in love through a simple dolly tracking shot as they walk the streets of Prague, disappear behind a row of stone pillars, and re-emerge holding hands. Self conscious and definitely aware of its coolness, "The Brothers Bloom" doesn't beat one over the head with it though. Keeping the sweetness intact between child-like Weisz and impressionable Brody as the story (and con-game) grows convoluted is the single masterstroke of Johnson's "The Brothers Bloom". Their relationship isn't a con, and that makes the whole thing work. While the black suits and shades worn by the brothers remains consistent throughout, there's a great scene towards the beginning of the film where we think the action is happening in some burlesque in 1920's Chicago, and then the brothers emerge in broad daylight on a graffiti-filled rooftop overlooking a very modern downtown. Again, some of the images in this film are breathtaking. Johnson seems to relish telling small stories against the fabricated backdrop of embedded narrative styles. And with "The Brothers Bloom" he does this magically. 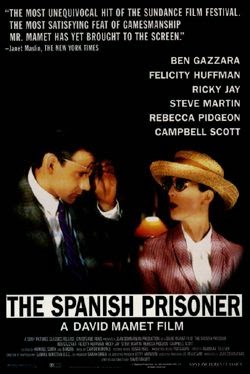 3. The Spanish Prisoner (1997)- David Mamet has etched a glorious career out of his razor-sharp words. The second Steve Martin suddenly appears and tells Rebecca Pidgeon "I'll give you a thousand dollars for that camera...." in response to inadvertently snapping a blurry picture of him and his (supposed) private plane in the background, nothing is what it seems. As the hot-shot designer of the classic "whatsit" and the technological breakthrough that seems to drive everyone's conniving angle in the film, Campbell Scott is perfectly dry and suited to the Mamet-fold of sheep being led to the slaughter house. I remember first watching "The Spanish Prisoner" in an empty theater in Waco, Texas, feeling awestruck by the mood and tone of Mamet's control. I went back that same night for a second viewing, hoping to connect the dots even more. Yes, its a brilliant con film, but what's not said is more pertinent to the film. It's silences, eye movement and mannered performances are the essence of good suspense cinema and "The Spanish Prisoner" wades exuberantly within these unspoken characteristics. Yes, I even appreciate the stiff performance of Mamet's wife and muse Rebecca Pidgeon here, whose odd inflections and theater-like cadence add a special dimension to the quicksand atmosphere. I think this film is ripe for a re-watch. And looking over the reviews again, I really forgot how well received this film was, garnering special praise from Ebert and really breaking out of the gates from an early premier at the Sundance Film Festival. Special mention to Mamet's "House of Games" as well.


2. Dirty Rotten Scoundrels (1988) - Oh how much I laughed as a kid at the iteration of "Ruprecht" by Steve Martin. Yes, its juvenile and slapsticky and obviously catered to the 80's (which is a whole other post), but "Dirty Rotten Scoundrels" also holds up today as a terrific comedy with a smart con at its core.

1. Hard Eight (1996)- Yes, it's not "The Sting" or "The Hustler" (although those are very obvious honorable mentions), but P.T. Anderson's mid 90's debut tracks the sleazy exploits of a down-on-his-luck drifter (John C. Reilly) and the mentor (Philip Baker Hall) who takes him under his wing, teaching him how to survive and thrive in Reno. Sharpened from an earlier short film work print called "Coffee and Cigarettes", the film brilliantly announced the prowess of Anderson through gritty performances, astounding cinematography and a strong sense of mise-en-scene as their relationship grows in complexity and danger. Choosing to set the film in Reno instead of the prototypical lush Vegas also adds a sleazy luster to "Hard Eight", succinctly conveying the smoke stained walls and greasy-fingered tables that dominate the film's settings. Very few films are as astounding right out of the gate as this.
Posted by Joe Baker