Spanish filmmaker Bigas Luna, who passed away last year, is a relatively unknown exploration in cinema for me. His films are not talked about much. Add to the fact his work is largely ignored here in America and mostly unavailable on home video, and it becomes clear he's not regarded as an essential figure. Well, after seeing two of his films from different periods in his career, I can attest his influence should be seen by many. Making films from 1978 until 2010, Luna's biggest side note seems to be his penchant for telling stories with a decidedly twisted, perverse sense of morality... and the fact that he basically discovered young Penelope Cruz and cast her in his 1992 film "Jamon, Jamon". Pitched somewhere between the classical style of Carlos Saura and the more wildy ambitious, sexually frenzied new wave of Julio Medem and Pedro Almodovar, Luna is a case study I hope to further develop.

The more accessible of the two films discussed here is "Anguish". Released in 1987, it could best be described as an art-house slasher film. Even though that sounds boring, please give it a try. It starts out uneveningly… a cross between a psych-out grind house film and “Psycho” re-invented with Zelda Rubenstein as the domineering mother and centrifugal force behind her son’s desire to kill people and cut out their eyeballs. As the son/killer, Michael Lerner plays his role to weird perfection, full of smarmy glances, nervous ticks and an equally unhealthy fascination with caged birds. But after the son commits his first murder (full of blood pools and cheesy horror film chases), Luna turns the tables on the genre and “Anguish” becomes super-meta. We soon realize that the mother/son gore fest is a film-within-the-film and we’re introduced to a host of people sitting in a darkened theater watching a film (humorously called “The Mother”). The on-screen unpleasantness seems to be bothering some movie-going patrons, especially young and impressionable Pattie (Talia Paul), whose squeamish reactions to every eye-slicing scene becomes more and more troubling. Added to the discomfort of the movie watchers is the incessant hypnosis that mother Rubenstein inflicts upon her son on-screen, complete with spiraling records, slow moving snails and her repetitive chants. Pattie has to get away from it all and exits the theater where she soon becomes witness to a variety of murders perpetrated by someone supremely affected by the slasher film. “Anguish” becomes a Chinese box of murders with the fictional film (art) imitating real life. Murders on-screen by the fictional son become intertwined with real life and Luna does a terrific job of mixing both time lines together so we (the real viewer in all this) become disoriented as to what’s real and what’s fictional.

﻿
“Anguish” is a bracing deconstruction of the slasher genre with something more important on its mind. And all of this is executed without a hint of sarcasm, irony or wink-wink fetishism. This is no 1980’s version of “Scream”. In fact, it plays the violence for dirty realism. Not only does he film bodies being dragged out of sight in the restroom with a perverse point of view, but the many images of people scurrying around already lifeless bodies attempting to take cover from incoming gunfire, become genuinely unnerving examples of random terror. In this day and age of repeated public shootings, YouTube suicide rants and screwed up manifestos, “Anguish” looks and feels like a prescient affair. Like the warning the film-within-the-film gives at the beginning (and a gimmick taken by provocateur Gaspar Noe years later for “I Stand Alone”), “Anguish” wants to disturb… and it achieves that brilliantly. 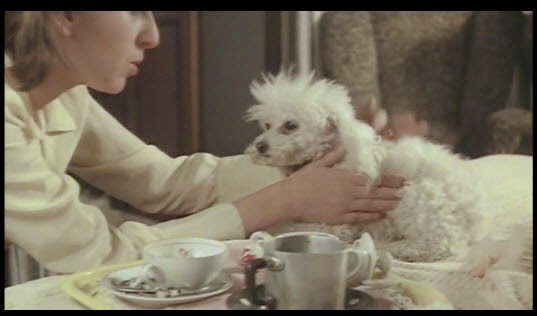 “Caniche” (“Poodle”), released in 1979, is Luna’s second film. Starring Angel Gove (who would act in many of his pictures) and Consol Tura as brother and sister in a completely unhealthy relationship, the film feels like an assault on a lot of things- including the domesticality of the upper class and our ever prevalent reliance of affection on animals over human beings. “Caniche” is also a film of its time. Spain, late 70’s… when a number of filmmakers were forced to convey a message against their political situation in nuanced and allegorical ways. The innocent victim in the middle of “Caniche” is Danny, a whimpering poodle forced to bear witness (and sometimes partake) of the various sexual perversions and psychological battle between brother and sister. Eloisa is constantly pulling the dog to her, settling him in comfortable positions and feeding him. Bernardo- the more silent of the couple- holds hidden feelings about his sister, becoming jealous when she begins seeing an older friend/doctor of the family. In addition, Bernardo fills his days hunting stray dogs to lock up in his basement, not only for nutrition for Danny, but to hold them for more nefarious reasons. “Caniche” is not for the faint of heart. Luna builds the story into a festering, perverse explosion that sees Bernardo literally morph into a hungry, horny, rabid dog. Its only fitting that the finale should be Danny high tailing it out of the house after the dust has settled. For an angry, veiled political shout, “Caniche” ends on an unexpectedly happy note for its conscientious observer.
Visually, “Caniche” is a fragmented effort. Full of low-level point of view shots (perhaps to indicate the perspective of a dog) and images of hands, legs, eyes and grassy exteriors, I can only recall a few times in which a character was shown in full body. It’s a decidedly intense way to build the story, leaving out more narrative than it includes. Then again, there are certain actions performed by brother and sister in “Caniche” that are better left unviewed in all their disturbing glory.

"Anguish" is available on Region 1 DVD. "Caniche" is unavailable on DVD.
Posted by Joe Baker