Rouhi (Taraneh Alidoosti) is a young girl who arrives at an apartment house to clean for owner Mozdeh (Hediyeh Tehrani). Mozdeh is in the middle of an argument with husband Morteza (Hamid Farokhnezhad). After the husband leaves, the jealous wife employs Rouhi to spy on her next door neighbor whom she suspects in having an affair with her husband. Rouhi, about to be a young bride herself, finds herself caught up even deeper in the relationship between husband and wife as she first lies in defense of the husband, then later becomes involved with the husband's duplicitous actions. 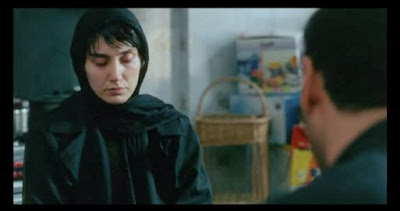 The intimations toward Farhadi's respect of the cinema of John Cassavetes seem most prevalent when it comes to "Fireworks Wednesday". Rouhi is, seemingly, an innocent bystander forced to observe the stressful arguments and jealous thoughts that swirl around both husband and wife. In one sensational set piece, Farhadi's tracking camera charts a verbal argument in and around the apartment for several unbroken minutes, shifting from person to person and room to room, heightening the tension as we struggle to understand exactly whom is telling the truth. In the jealous wife, Tehrani is a trembling, nervous screen presence, even resorting to following her husband to work... a covert act that ends up with him slapping her on the street as the camera observes from a closing elevator door. Juxtaposed against her vibrating energy is Taraneh Alidoosti as Rouhmi. Her wide, beautiful eyes and exuberance about young love serve as the perfect antidote for her employer's poisonous marriage. We root for Rouhi, even though her character is a pawn in the ever shifting game. This is exemplified later in the film when husband Mozdeh offers to give her a ride home. We soon discover the long sequence is just an excuse for her to watch his son as he conducts other business. Like the best films of Cassavetes, "Fireworks Wednesday" settles into that supremely uncomfortable space where people use each other for duplicitous acts and psychological warfare. And like "A Woman Under the Influence" or "Minnie and Moskowitz", it also features a strong woman blurring the line between the real and the suggested. "Fireworks Wednesday" is a bracing example of the complicated, adult problems that not only made Cassavetes one of the giants, but seems to be propelling Farhadi as well.
Posted by Joe Baker