One never quite knows what they're getting themselves into when they venture into the outsider 70's cinema of Eastern Europe. Films by the likes of Krystoff Zanussi or Miklos Jansco can be quite maddening, adventurous efforts. Well, the same can be said for Johannes Schaaf's "Dream City". Part horror movie, part apocalypse film but mostly just an angry allegory of man's inherent ability to destroy everything he touches, "Dream City" stars Per Oscarrson as a writer who receives an invitation from an old school friend to travel to his city where everyone lives in peace. The writer and his wife make the trip and end up in the dilapidated city where not everything is as peaceful as it seems. 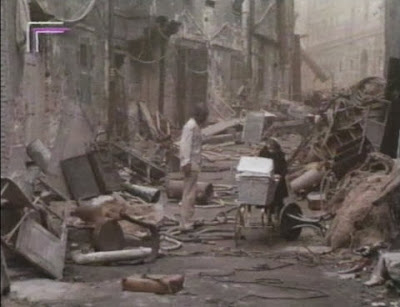 "Dream City", released in 1973, is one of those wild films whose ideas are swirling in every frame. After arriving in the city, the writer and his wife become pawns in an ever-shifting game of human chess. The writer's attempts to visit Patera, his old friend and seeming sole oligarch of the city, is met with bureaucratic blindness and ineptitude. In fact, the civil servant the writer goes to see for his "audience pass" makes him come into his office not once but twice just so he can repeat his practiced lines several times.... since he interacts with so few people. The writer's wife, played to shrill perfection by long time actress Rosemarie Fendel, meets an even odder fate.... first, caught as the unwitting victim in a massive theatrical performance where everyone in the city seems to be play-acting their own fantasies (and featured as the film's crazy centerpiece of sound, camera movement and chaos) then secondly slowly becoming he voice of reason to her husband that this paradise is far from normal. Added to her misery is the fact the the writer has become infatuated with a deaf-mute beauty (named Olimpia, whose only screen credit is this film) who wanders around the city, sometimes involved with a man named Hercules Bell, a revolutionary intent on bringing violence to the people. In fact, it's this vague reference to a coup de tat as well as the shocking unmasking of the real Patera that gives "Dream City" its subversive impetus. It's as if a Grimm fairy tale were updated to the swinging 60' with a violent anarchic bent. As one can tell, this brief synopsis barely scratches the surface of Schaaf's weird allegory, but one that demands to be seen by anyone searching out the undiscovered, dark efforts of European cinema. . 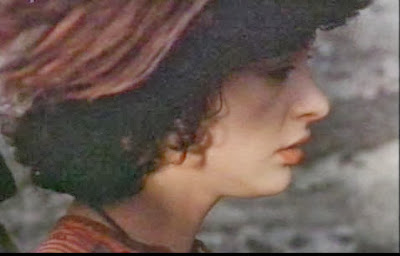 Director Schaaf, judging from his profile on IMDB, could be an interesting experiment if more his films were available. See the description for a 1986 film called "Momo" with John Huston?! "Dream City", although encumbered with a lack of focus at times, it's still a highly watchable effort that will most likely improve with viewings as its dense themes and busy visual scheme hide certain elements on initial viewings. If nothing else, the image of a bald, naked woman wearing some sort of gold 3D glasses (a motif hinted at in the film, yet never really explained) is enough to make one seek out answers from this truly original work.
Posted by Joe Baker

Woah!! Krzystof Zanussi's films a maddenning, adventurous effort?? His films are many things... but that? Are you sure you didn't confuse him with Żuławski or Skolimowski, or Has, or Konwicki, or Wajda even? If yes, then I'd very much like to try the stuff that you're smoking!