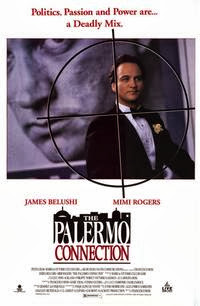 By the time "The Palermo Connection" was released in 1990, Italian director Francesco Rosi was in a precarious state. His run of international political thrillers ("The Mattei Affair" and "Illustrious Cadavers") and generous remembrances of family ("Three Brothers" and "Christ Stoped At Eboli") had dried up and his previous film, "Chronicle of a Death Foretold", failed to make a splash beyond its Spanish setting... and still nearly impossible to find today. With "The Palermo Connection", there were several things on his side: a big name American cast including Jim Belushi and Mimi Rogers, and the interest in Italian-American relationships stirred up by Francis Ford Coppola's divisive third part of his "Godfather" trilogy. Unfortunately, none of this aided Rosi's film as it came and went in theaters and is still relegated to only shoddy VHS prints today. Being the Francesco Rosi fanboy that I am, I had to weigh in on this (often) misunderstood effort. Jim Belushi is Carmine Bonavia, a city councilman running for New York mayor. Disgusted by the rampant proliferation of drug pushers in and around the city, he makes it his campaign promise to work towards the legalization of drugs. This gives him a rise in the polls, but alienates the mob in the city. When he and his new wife, Mimi Rogers, travel to Italy to visit his relatives, the mob presence creates a tense situation for Carmine and his new bride.

Positioned somewhere between those late 80's direct-to-video actioners and a more serious-minded exploration of the politics behind the Old World mafia, Rosi's "The Palermo Connection" is still an interesting work. Judging by the vitriolic IMDB comments, people were obviously expecting a fast and furious action film when there are, ironically, only a few scattered gunshots during the entire film.... one of them leaving a lasting impression though. "The Palermo Connection", like most of Rosi's work, is first and foremost a travelogue film.... placing characters in a specific time and place and then spinning out a grand tale that takes into account local customs, dialects and superstitions. Once Belushi and Rogers hit Italy, the film slows down to a crawl where Rosi's gliding camera effortlessly tracks down wind-swept marble balconies and abandoned castle rooms. "The Palermo Connection" is clearly in love with the old country, and Belushi and Rogers are along for the ride. One of the more fascinating asides the film makes is its introduction of a character simply known as the Prince, played by Vittorio Gassman. He tells Rogers that he cannot leave his plush hotel room to take a picture with her. Later, a delegate from the American embassy tells them that the Prince once tried to take on the mob and was given a choice: live in this hotel room for the rest of his life or be killed. Exaggerated as it seems, this type of human banishment feels like an all too real punishment in the Old World.

There are flaws with "The Palermo Connection", though. A hurried denouement doesn't really coexist with  the leisurely pace Rosi developed up until that point. Frankly, Mimi Rogers and even Belushi, in certain scenes, feel miscast. And the central idea of a mayoral candidate leaving the US in the middle of a heated race for a jaunt around Europe seems highly irresponsible. Still, the seamless blend good hearted politics colliding against the criminal enterprise is an idea Rosi has toyed with since the beginning, and while "The Palermo Connection" isn't as sharp as say "Hands Over the City" in that regard, it does deserve a better fate than that-Jim-Belushi-film-no-one-talks-about-anymore.
Posted by Joe Baker