Halloween Kick Off Double Feature: The Addiction and Ganja and Hess

Bill Gunn's "Ganja and Hess" (1973) and Abel Ferrera's "The Addiction" (1995) are unique "vampire" films, if one's even inclined to label both efforts. I don't know if I'd even lump these films into the horror genre as both works are defiantly independent takes on the idea of the mythological blood-addicted creatures, whether through budgetary constraints or, most likely, their individual director's extreme avant garde prerogative. Both films explore the psychological consequences when an intelligent person (African-American doctor Hess, played by Duane Jones and white undergrad student Lili Taylor) become infected and crave human blood. While Ferrera's vision of this horrific perma-life is carried out in the comfortable, seedy confines of his New York City (and in saturated black and white to dilute the bloodletting), "Ganja and Hess" resides in a more dreamy, classical large manor. Both films are mood films in the purest sense, at times explaining nothing and allowing the angry socio-political views of their authors to overtake the narrative force. "Ganja and Hess" itself is a call to arms for radical independent African American filmmakers of the 70's. Not many people besides Marvin Van Peebles and other blacksploitation artists where seeing their visions on large American screens. Ferrera's "The Addiction" (still not available on home video or DVD) spends more time questioning mass genocide and the Vietnam war than actual 'vampirific' acts. Needless to say, both films had much more on their mind than vampires, and it shows. 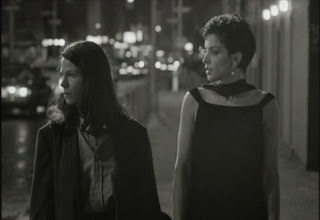 Released in 1995, "The Addiction" came at the crest of a wave for Ferrera. Coming off critical acclaim for a string of films including "The King of New York"and "Bad Lieutenant", "The Addiction" is a terrific example of the burgeoning mid 90's indie scene..... a scene that spawned a couple of introspective, well crafted but marginalized vampire films like Michael Almeryda's trancing "Nadja" and Larry Fessenden's "Habit". Starring Lili Taylor, the film opens as she's in the middle of a stressful student year at NYU. Confronted with images of slaughters in Vietnamese villages and constantly thinking about war atrocities as she studies to be a psychiatrist, it's not 5 minutes into the film when she's whisked away down a dark alley and promptly bitten by Annabella Sciorria in a scene that, in my opinion, rightly justifies Ferrera's splendid use of black and white. It's a quick and violent infection, just as if the war atrocities were being inflicted upon her body as well. From there, "The Addiction" is a relatively straight-forward tale of blood lust as Kathleen (Taylor) stalks her campus, eventually infecting her best friend (a young Edie Falco) and teacher (Ferrera regular Paul Calderon). Her bloodlust begins to spiral out of control though, which is one of the many modern inflections Ferrera and screenwriter Nicholas St. John add to the vampire myth. Her psychology background, the writer and director's ever present Catholic guilt, and modern cinema's own need to rationalize and re invent genre in self reflexive ways, drive Kathleen to exorcise the habit overtaking her. In what's probably the best scene in the movie for its quiet acceptance of death, Kathleen lies on a hospital bed and asks for the blinds to be open. Ferrera anchors his camera at the foot of her bed as the sunlight slowly creeps down the wall towards her. Not only is it one of the film's most operatic moments, but it fits so nicely into the Ferrera mold of self immolation and mythic redemption. 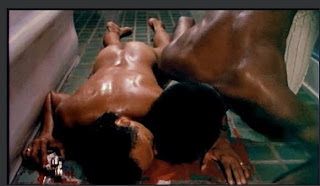 "Ganja and Hess" also features a self imposed act of exorcism. Starring Duane Jones as Dr. Hess, the film explains through opening title cards that doctor Hess was studying ancient tribal mysteries when he comes into the possession of a dagger that is "diseased". Hess takes in assistant George (played by director Bill Gunn himself), a mentally unstable man who eventually stabs Hess with the dagger, "wherein he becomes addicted and could not be killed or could not die". It's in these careful framing words that director Gunn sets up the implications for something larger than blood lust. After killing George and stuffing his body in a basement freezer, Ganja, George's wife, returns to the States and takes up residence with Doctor Hess, awaiting the outcome of her husband's "disappearance". She and Hess fall in love, although it's quiet the sadistic relationship. Ganja, played by Marlene Clark, takes pleasure in insulting Hess's butler and promptly throws her weight around the house. Even after finding her late husband's body in the cellar, she marries Hess and establishes quiet a unique marriage.

Like "The Addiction", "Ganja and Hess" is an art film first. A victim of its time (early 70's funk cinema and Times Square exploitation), "Ganja and Hess" feels, looks and sounds cheap.... all things that filmmaker Gunn makes up for in dreamy narrative. Images of the tribe bleed into real life with droning chant-like sounds.... jump cuts establish no rhythm and force us to recognize the interaction between people quickly, and the blood that Hess so craves is often orangish tomato juice. But its the ideas that give "Ganja and Hess" its creative power. Like "The Addiction", this is one way to substitute the universal struggle of addiction into an easily identifiable means of expression. Whether that addiction is substance based or the paralyzing fear of mass destruction and the apocalypse, both Kathleen and Dr. Hess are just inquisitive, educated people inoculated by the dangers of our time. Separated by 22 years, both films create a dazzling double feature that feels almost interchangeable. In "Ganja and Hess", one scene has them lying in bed together when Dr. Hess asks "do you think I'm still psychotic?" Her reply of "everyone has their freaky side, baby...." would fit right at home in the punk rock nihilism milieu of Abel Ferrera's cinema.