When films like "Mad Max", "The Day After" or "The Road" set the viewer in a savage, post-apocalyptic world where survival is boiled down to the essentials like a knapsack of canned goods or warm clothes, Mick Jackson's startling TV movie "Threads" shows us just exactly how we got to that violent point in mankind. Released to great acclaim on BBC television in 1984, "Threads" has since vanished from home distribution, which is a shame because not only is it a highly plausible and fascinating pseudo documentary, but a very scary entry in the post apocalypse genre that's been rejuvenated by the likes of zombie plagues ("The Walking Dead") and big budget vehicles ("I Am Legend"). 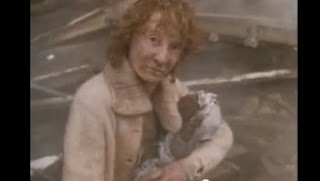 Beginning with the intimate and working out towards the global, "Threads" open with the young romance of Ruth (Karen Meagher) and Jimmy (Reece Dinsdale), deciding to get married after Ruth becomes pregnant. We're then introduced to both families in the urban town of Sheffield, one a bit more higher along the class system than the other. There are hints and reports of growing threats between Russia and the United States, inferred through snippets of radio broadcasts and newspaper headlines. Slowly, life becomes unruly when submarines are sunk and encroachments along the borders of certain nations are mentioned. Grocery stores run low. Local authorities go underground to convene special recovery governments and talk through their plans. After establishing some sympathy with our neutral observers, "Threads" launches the mushroom cloud at about the one hour mark, and the rest of the film is a harrowing exercise in death, survival and nuclear winters. What makes "Threads" so believable, besides its ominous cuts to text on the screen that states things like "500 million tons of radioactive dust in the atmosphere" and the devastating effects on crops and human life years after the explosion, is the bureaucratic breakdown of society. Not only are ordinary people unable to cope with the nuclear attack, but the independent governments set up around England are under-manned, underwhelmed and simply not prepared to deal with survival on a grand scale. Often overlooked is the basic fact that, upon any first nuclear strike, an EMP wave will knock out all communication and electricity immediately. In our wired society today, that spells disconnect and panic. "Threads" succinctly analyzes every aspect of the possible disaster. And with eloquent minds like Carl Sagan and Dr. Arthur Katz lending contributions to the film, its science is both foolproof and real. 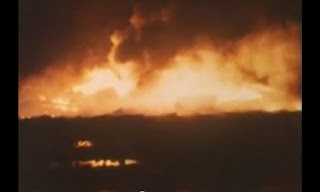 Director Mick Jackson would go onto fame in the 90's with endearing films like "LA Story" (more of a cult classic than anything) and "The Bodyguard", but its his modestly hidden TV terror classic "Threads" that ranks as his best work. Writer Barry Hines also deserves alot of the credit. If one has grown tired of the fictional accounts of what the world would be like after a nuclear holocaust, "Threads" documents a convincing 1-2-3 step process. And that final scene, lingering on 13 years after the disaster, just calls for its own movie.... a hugely sad and nihilistic salute just when one thinks there may be a glimmer of optimism.
Posted by Joe Baker

THREADS simply stomps all over its Yankee cousins. A local NYC station showed this--in B&W! (to reduce the gore, I suppose)--and it really kicked my butt as a kid. To me, "The Day After" was one step above Corman's The Day the World Ended, but Threads was the real deal. I even picked up the UK DVD...
Thanks,
Ivan