Jumper or Junkie: Sound of My Voice

Zal Batmanglij's "Sound of My Voice" is a low-fi stunner. Co-written by himself and actress Brit Marling- who was so good in last year's "Another Earth"- the film challenges the viewer in many of the same ways. As a micro-budget science fiction indie, "Sound of My Voice" exceeds its modest expectations. As a whodunit and elliptical thriller, it knocks it out of the park. 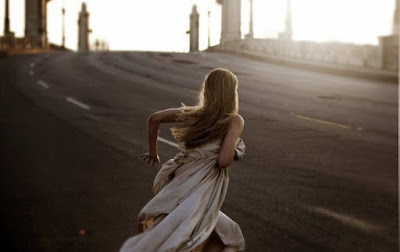 Opening in the midst of a transfixing procedure as Peter (Christopher Denham) and Lorna (a wonderful Nicole Vicius) are blindfolded, bathed and led into a nondescript basement, we soon learn the couple have been accepted into an exclusive sect of people, led by the sickly Maggie (Brit Marling) who claims to be from the year 2054. She preaches to them, puts them through nervous psychoanalysis (eating an apple then having them puke it up) and promises to lead them into safety when an upcoming cataclysm will strike. Not long after, we learn that Peter and Lorna have infiltrated the group as an experiment to create a documentary about the mysterious Maggie. "Sound of My Voice" remains, mostly, in the confines of Maggie's presence as her stories and lulling personality drive a wedge between the reality of Peter and Lorna. The big question which looms over the entire film- is Maggie real or a scam artist- comes into muddy moral focus when she asks Peter to commit a crime for her. As the star of both this film and "Another Earth", actress Marling has become the sort of queen of the micro-indie sci fi tale. While I feel "Sound of My Voice" is the stronger of the two efforts, Marling possesses a mysterious quality that enables her to embody boh roles- morose lurker in one and ambient, trance-inducing beauty in the next- with perfect ease. And both films feature a shocker of an ending, with "Sound of My Voice" delivering an ambivalent denoument that reinforces the slow-burn momentum of everything up to that point.
Posted by Joe Baker