"State of Siege", directed by Costa-Gavras, has alot in common with the 70's films of Francesco Rosi.... films that are right in my wheelhouse with their dry, intelligent depiction of the vagaries of big government mixed up with corruption, terrorism and bureaucratic mess. Like "The Mattei Affair" or especially "Lucky Luciano", Costa-Gavras' film takes one incident- the kidnapping of a high ranking government official- and spins a narrative from several angles, viewpoints and moral conviction. And because the film opens with a startling discovery, the prime motivation is not in telling the story with a resolution, but in the high--wire act that both sides of the law navigate across.

Released in 1973, gaining no real fanfare and relatively lost in home video distribution (my copy is a Region 4 disc from Spain), "State of Siege" is an amazing and angry film. Yves Montand plays Philip Michael Santore, an agent for the AID (US Agency For International Development) when he's kidnapped by a group of terrorists and held hostage. The entire course of the film is refracted back and forth across several Latin American countries as one of the kidnappers interrogates Montand for his supposed in collusion with the government, especially his role in creating police states and roving "death squads" around the globe. There are many moments for Costa-Gavras (always the liberal leftist) to display these absurd acts of violence and husky, looming stares of the men in charge to clearly define the 'good' and the 'bad' and position himself clearly on one side of the fence, but "State of Siege" also generates some honest moments between terrorist and hostage. It's left up for interpretation exactly how much Montand is involved with the charges waged against him, and the scene where he meets his mortality rings as an honest, quiet reaction. 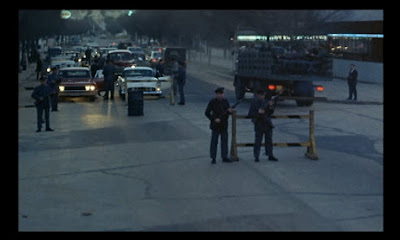 "State of Siege" is an amorphous title. A majority of the film details the police state Uruguay is hurtled into after Montand and two other officials are kidnapped. It could also reference the attack on Montand's character as well. Like "Z", Costa-Gavras takes a purely functional stance, relieving the film of any real emotion. "State of Siege" is a film of action and idea, working in painstaking detail to show how the terrorists carry out the kidnappings, stealing one car after another, parking them in strategic locations and executing their plan. Later, when the fate of Santore is put to the group, Costa-Gavras holds on a bus passenger as a stream of terrorist partners nonchalantly get on the bus, carry on the same conversation over and over, arrive at a judgement, and then exit the bus. It's democracy perverted, but democracy nonetheless. Yet just as much attention is given to the police force as they relentlessly canvas the city as well as a journalist (the great O.E. Hasse) probing military and government officials for their (non) response to the event. All sides of the argument are given weight, and for a politically charged film such as this, that's all one can ask for. 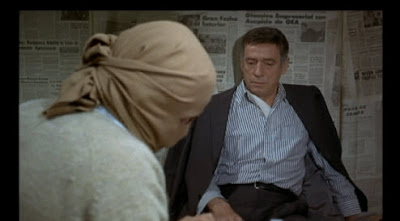 Costa-Gavras would go on to a great career, racking up Hollywood efforts like "Betrayed", "Mad City" and "Missing", but nothing comes close to the incisive, burning power of his early 70's political thrillers such as "State of Siege".
Posted by Joe Baker