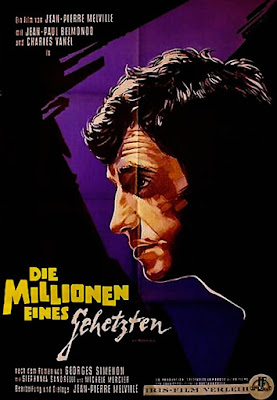 In between a string of moody crime films, French filmmaker Jean Pierre Melville released a gentler movie that afforded him the opportunity to view America from a European sensibility. Released in 1963 and starring Jean Paul Belmondo, "Magnet of Doom" is one of the hard to find Melville efforts probably because it broke the mold of his previous noir-ridden tales of loner criminals and trenchcoated cops. Also based on his own screenplay, "Magnet of Doom" concerns itself with the bankrupt empire of a French financier (Charles Vanel) escaping Paris in the aftermath of his company's shady business dealings. He posts an ad in the local classified section for a secretary and washed up boxer (Michel (Belmondo) answers it. It's not long before the two are hopping a plane for New York and then driving across America where they settle in New Orleans... one of them running from an extradition warrant and the other just running from his boring Parisian lifestyle. The central conceit of the film, besides the father-son relationship that slowly forms between Vanel and Belmondo is a topographical one. Melville is clearly fascinated by this alien landscape, allowing his camera to peruse over the tall buildings of Manhattan just as lovingly as he observes Blemondo and a hitch hiker (Stefanie Sandrelli) lounge by a rural stream. And we have to make pit stops along the way, once to observe the small Hoboken apartment where one Frank Sinatra was born and then later to document the obvious cultural differences between the white residential area of New Orleans and its African-American inhabitants. Above all else, "Magnet of Doom" swirls through a variety of genres, eventually settling on a moral tale that continually has one wondering just exactly where its headed. 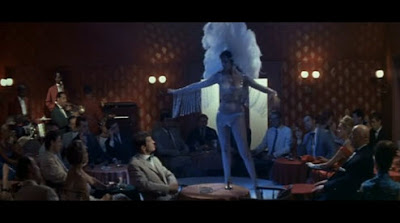 Surrounding Melville's wide-eyed images of America lies Georges Delerue's melodic soundtrack that, at times, reminds one of a western. At one critical moment, when Vanel decides to dump his life savings over the cliff, "Magnet of Doom" recalls the psychological emptiness of John Huston's "Treasure of the Sierra Madre"... high praise that I'm sure Melville never intended, yet the film faintly echoes throughout its entire running time. But perhaps the most incredible aspect of the film is that, a dozen or so years before it became quite fashionable to pose a European art film against the backdrop of the Americanr road movie (Wenders, Akerman etc.), Melville was setting the blueprint- just as he did for his hardboiled French re-inventions of the noir genre. With "Magnet Of Doom", he simply went right to the source itself.
Posted by Joe Baker