70's Bonanza: Man In the Wilderness 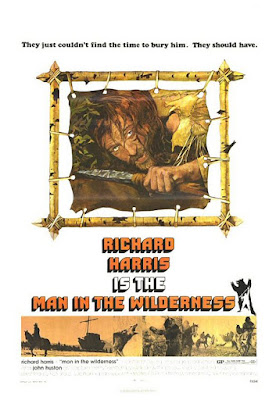 Richard Harris was a badass. With his wisp of white stringy hair, piercing blue eyes and staccato Irish accent, he was a unique talent for decades. In early 1970, Harris reached American acclaim through his performance in the cult classic "A Man Called Horse", followed up a year later in 1971 with "Man In the Wilderness". Mismanaged as a revenge western, both in the poster's tagline and its current home as the second side of a double feature disc with the far inferior film "The Deadly Trackers", "Man In the Wilderness" is a survival film of the highest order. Directed by Richard Sarafian ("Vanishing Point" fame), "Man In the Wilderness" is an almost wordless tale about a hunter (Harris) left for dead and his slow, deliberate recovery in the American frontier West. Like Joseph Losey's "Figures In a Landscape" or Jerzy Skolimowski's recent "Essential Killing", it's brutal nature versus man as he struggles against the elements, hungry beasts and other carnivorous humans... all played out in patient and observational cinematic flourishes.

Taking place in the early 1800's as a fur hunting expedition crosses new territory, Harris is one of the many marksmen promptly mauled by a bear and left for dead by his crew, led by a wonderfully atmospheric John Huston as Captain Henry. In direct opposition to nature's serenity, Huston has his men drag him across the terrain on a boat equipped with wheels. Much like Werner Herzog's "Aguirre, Wrath of God" produced a year later, it's a demanding visual image that plays like a bullheaded ode to manifest destiny superiority of the 'white man' and his encroaching presence in the wilderness. When the two men assigned to watch over Harris flee from the cowardice of approaching natives, "Man In the Wilderness" turns its attention to Harris and his meticulous recovery from death's door. It's fascinating to watch him bury himself in his own grave for warmth or his impromptu animal traps that sustain his eating habits. But through all this, "Man In the Wilderness" is so good because it avoids the obvious conventions of the revenge drama. Cursory scenes are given to Huston and the trappers who fled from Harris' body and the almost superstitious air of menace that Huston feels is lurking in the forest after them, but director Sarafian and writer Jack Dewitt progress Harris as something nobler and better than the lot. "Man In the Wilderness" is a perfect example of understated and overlooked 1970's filmmaking.
Posted by Joe Baker