Into the Deep End: Assayas and "Cold Water"

A natural cinematic trademark of French filmmaker Olivier Assayas is the idea of life and death in flux. His best films- "Late August, Early September", "Summer Hours" and "Clean"- all begin their emotional journey during or after the death of someone and the ensuing remnants of the living left behind. His 1994 film, "Cold Water" celebrates life for a majority of the picture, following two teenagers in love as they're separated and then re-joined... only to have life rudely interrupt their halcyon time together. 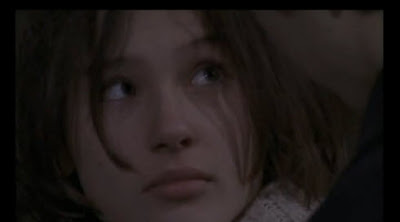 Paris, 1972, a time not unnoticed for its lasting impact since the late 60's and France's youth upheaval. Christine (Virgine Ledoyen) and Gilles (Cyprien Fouquet) are troublemakers, but inseparable. After a brief stint of shoplifting, Christine is captured but Gilles gets away. She is sent to a youth home while Gilles continues his destructive bent by purchasing sticks of dynamite and being kicked out of school. But rather than a Truffaut like coming-of-age story, Assayas delivers a much different and affecting tale of these teens. In one scene, Gilles' father tries to reach him through gentle conversation and level headed realism. "Cold Water" then shifts gears from the paternal bonding to a raucous, furious teen party in the middle of a decrepit mansion where Christine, newly escaped from her detention center, meets up with Gilles and young, impenetrable love rules again.

In typical Assayas fashion, a majority of "Cold Water" is filmed with a nervous handheld look that can barely hold his characters in the frame. At the party, which encompasses over a third of the film's ninety minute running time, the mood is energetic and clearly reminiscent of his own late night escapades. Music from Leonard Cohen, Janis Joplin, Nico and CCR are continually kicked off the record player with a scratch of the needle and Assayas' camera alternates between long takes that casually follows kids as they wander around the premise, take hits off a pipe or become heathens tossing furniture into a huge bonfire. After a while, the film resumes the relationship of Christine and Gilles in two very indelible moments- the first as Christine slowly roams around the house, cutting off bits of her hair with scissors.... and the second a more gentle expression as they dance together and lose themselves in each others embrace. Christine, as performed to perfection by Ledoyen, is a troubled soul and Gilles is her emotional rock, both of these sensibilities exemplified in wordless exchanges that form the core of "Cold Water". Tough times are ahead for these kids after the ebullient energy of a party such as this, but for that one night, their innocent worldview couldn't be more peaceful. 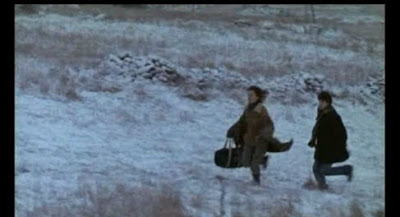 Released in 1994 before Assayas would become an international sensation with "Irma Vep", I'm tempted to call "Cold Water" his best film- though I've yet to find three more of his earlier films. Ledoyen would go on to become a marginal star in the late 90's alongside Leonardo DiCaprio in the under appreciated "The Beach" and we're all aware of Assayas' cinematic legacy. "Cold water" is a tender, alive and raw example of a film that deserves a larger audience.
Posted by Joe Baker