Revisiting the Faves- The Spanish Prisoner

"The Spanish Prisoner" ranked as my number 12 favorite film in 1998.


In every David Mamet film, there's a line of dialogue that becomes its rallying cry or its fateful line of demarcation from normalcy into the con job such as the punishing overuse of "where is the girl?" in "Spartan" or the nonchalant way in which Gene Hackman mutters "it happens" in "Heist". When Steve Martin appears on screen and coolly announces, "I'll give you a thousand dollars for that camera", we fully understand the game has been set afoot. 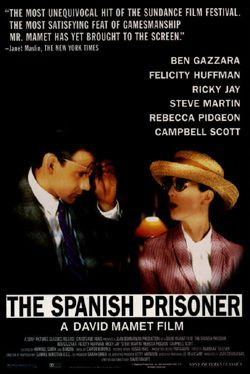 "The Spanish Prisoner" takes its name directly from an ancient con, as explained by Mamet stalwart Ricky Jay in the film, and its sights are set on meek inventor Campbell Scott. Like a majority of the twists and turns within the film, the very thing (called 'the process') that fuels the narrative is obfuscated. All we know is that inventor Scott has created something that will make Ben Gazzara's company very, very rich. There are talks of "the Japanese" trying to steal it and the FBI on the trail of something or somebody. Mamet's razor sharp dialogue that, like Michael Mann, abhors contractions usually dances around telling the truth. The worst part of all is that we never know who to trust or when. There's soft-spoken and beautiful Susan (Rebecca Pidgeon) who seems like an ally and then does things to question her loyalty... just like the best femme fatale. Is the aforementioned Ricky Jay, as Campbell Scott's friend, business partner and lawyer really sick or is there something more insidious about him? Which brings us to Steve Martin in an icy performance that ranks as one of his all time best. He befriends Scott on a vacation island and then continues the friendship back in New York with the promise of setting him up with his sister.... an engagement that never seems to materialize. In all honesty, the film pretty much signals that Martin is the bad guy, yet it continually usurps our expectations in every other sense. "The Spanish Prisoner" is another brilliant con movie in which Mamet excels his three card monty-like attitude with cinematic flare.

Becoming a quiet sensation at the Sundance Film Festival that year, the reviews were mostly favorable for "The Spanish Priosner" despite the seemingly awkward performance of Mamet's wife Pidgeon. While her stilted line readings and formal rigour do ring untruthful at times, it doesn't ruin the film. In fact, I took her performance to be a secondary delight... as if she was trying to re-enact a 1940's femme fatale or maybe playing the role as if her character were being forced to do certain things she had never done before. Regardless, "The Spanish Prisoner" is a wickedly entertaining intellectual thriller. Just feel the subtle tension built up around a brown paper wrapped gift or the terrific moment when the camera slowly pans across an airport X-ray screen to reveal a gun hidden in a possession. And maybe it was the Japanese after all.
Posted by Joe Baker