The unfortunate aspect of Don Siegel's 1974 low-fi thriller "The Black Windmill" is that it came so late in his career and, more importantly, after the zeitgeist-capturing greatness of "Dirty Harry" just three years previously. Relegated to scarce TV showings and limited home video distribution, "The Black Windmill" deserves better than that. 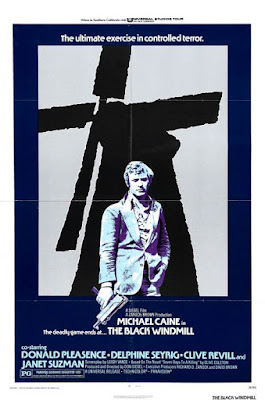 Starring Michael Caine as a variation on his Harry Palmer spy caricature, there's an especially nasty tone to this wonderful film. All is fine and dandy until a couple (John Vernon and Delphine Seyrig) kidnap two young boys playing in an abandoned military field. One of the children turns out to be the son of Caine and the couple's intention is far darker than your simple extortion plan. Caine's superiors- including a mustache twirling Donald Pleasance- don't fully believe Caine's serendipitous predicament since the kidnappers are asking for ransom in the exact amount of fine jewels acquired by the agency just days prior. Caine then breaks chain of command and globe trots to Paris and back to the English countryside with a one-man vendetta to rescue his son. As a thriller, "The Black Windmill" is largely unremarkable. It's far less interesting to recount the plot point than to bask in the funky 70's mood of the entire film. We get the ubiquitous parade of MI-5 and MI-6spooks tapping phones and smoking cigarettes in darkened rooms. Caine plays himself like Michael Caine always does... a bit cheeky (none more so than when he winks at a spook he's just outsmarted in the subway terminal) one minute then determined and focused the next. The beauty of "The Black Windmill" lies in the off-center eye an American director like Siegel brings to the project. Caine and his wife, played by Janet Suzman, are on the outs and this tragedy brings them together. In one scene, Caine goes to see her and she's distraught, wandering outside in their lush garden on a cold day and we get a glimpse of her quickly walking into the bushes. Caine follows and the mood is tense before he finds her.... but the thought that her elusive presence generated through quick editing cold be some sort of spook trick hovers over the scene. Also, the ending as Caine finally tracks down Vernon and his crew in the titular structure begins and ends in cathartic violent fashion after immense build-up. It's an ending that doesn't disappoint, fitting perfectly with the cold and calculated expertise of a trained spy like Caine. I certainly loved his sandbag trick, which has to be seen to be appreciated.

"The Black Windmill", adapted from a novel by Clive Egleton, received middling reviews upon release in 1974. After the commercial and critical favor of "Dirty Harry" and "Charley Varrick", I suppose it would be natural for audiences and critics to expect another genre-breaking effort from Siegel who had been doing that sort of thing in his sleep since "Invasion of the Body Snatchers" in the mid-fifties. While its true "The Black Windmill" is more of a slow burn than an outright actioner spy thriller, it is a marvelous metaphor for Britain's swinging 60's excess coming home to roost at the highest echelons of power. And it features an exploding briefcase that would make James Bond jealous.
Posted by Joe Baker