Working on the margins of even independent cinema since the late 70's and carving out a uniquely original voice, filmmaker Jon Jost really came into his own during the early and mid 90's. The benefactor of several retrospectives of his work and lavish write-ups by critics around the world during this time, it's all to sad that a majority of his work is still unavailable on any type of home video distribution today. And as for the unique voice part, once one sees a Jost film, it sticks inside your head like nothing else, developing its own rhythm and visual scheme that instantly identifies itself as something completely organic. 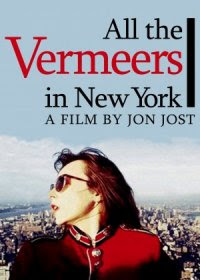 The one Jost film that is currently available on DVD, "All the Vermeers In New York", is as good a place as any for novices to start. Divided into a series of scenes that play out with much patience, it's a collage of several people in New York City who come together through a fateful meeting in a museum between stockbroker Mark (Stephen Lack) and aspiring French actress Anna (Emmanuelle Chalet). He instantly falls in love with her, comparing her beauty and high forehead to the paintings of Vermeer he observes her studying. Growing out from there, we meet Anna's room ate Felicity (Grace Phillips) who helps Anna remain a cool distance from her suitor on their first meeting when the girls pretend Anna doesn't speak English. Felicity comes from a wealthy background and we observe her arguing with her father over the (possible) immoral use of her name involved with his investments. There's also an unusual scene between a painter (Gordon Weiss), desperate for money from the gallery owner for his paintings which ends with him cutting his work directly out of its frame. The idea of money, financial incongruities and art waver throughout Jost's film. We observe mark's stressful days in a stockbroker firm in two long takes as he wheels and deals on the phone. Felicity obviously wants to distance herself from her father's potentially dirty money, but just can't seem to afford to. And as for the central relationship between Mark and Anna, Jost avoids heading into rom-com niceties, exposing the relationship as something true on Mark's part but predatory on Anna's... such as when she asks him for a loan to help pay her rent then pines for her "boyfriend" back home in Paris in the next scene. If anything, "All the Vermeer In New York" is a cautionary tale about forced attraction in the urban jungle. Does Mark, who seems to frequent the Met often, simply fall in love with the perfect idea of Anna or is he truly in love with her? In typical Jost fashion, he raises more questions than answers, opting to portray a mood and feeling rather than a cut and dry romance. Two scenes in particular go a long way in sustaining this mood- the first is a methodical tracking shot around the halls of a museum... a shot Jost loves to repeat in later films such as "The Bed You Sleep In"... and the second is a trip to the pinnacle of the Twin Towers where both Anna and Mark espouse their views on life and ultimately probably define why they are not made for each other.

In 1990, Jost released "Sure Fire", a film about as far away from the concrete hustle and bustle of the New York art world one could get. Starring Tom Blair as Wes, a fast-talking real estate developer in Utah, it's a spare drama that builds to a violent climax with very little effort. Blair is the archetypal Jost leading man.... articulate, calculating and without a swear word in his vocabulary. In his numerous scenes, both at work and home, Blair sends out a host of "by gollys" and "you can bet on that" in his monologues. Small glimpses of his home life reveal his wife is struggling with their marriage, none more so penetrating than in a five minute take as she ruminates on her life through an allegorical tale of a trapped farm animal. 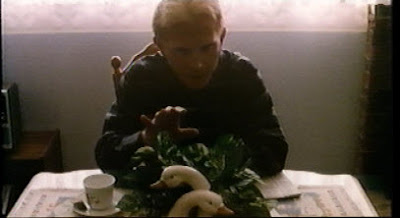 The final half of the film involves Wes taking two friends and his son on a hunting trip. One scene, as Wes gives his son his first hunting rifle than spends an extraordinary amount of time explaining the do's and dont's of firearm safety, Jost creates immense tension seemingly out of thin air. Throughout its relatively short (80 minutes) run time, "Sure Fire" etches into the viewer's consciousness that something terrible is on the horizon and then promptly delivers. While neither "Sure Fire" not "All the Vermeers In New York" play by the rules, they are both galvanizing examples of the experimental and independent nature of Jon Jost. Even though there are 2000 miles in between their stories and settings, both films acutely emphasize that unhappiness and the unpredictability of human nature can strike anywhere and anyone.